Fish worth Tk21 crore wash away in Sunamganj flood 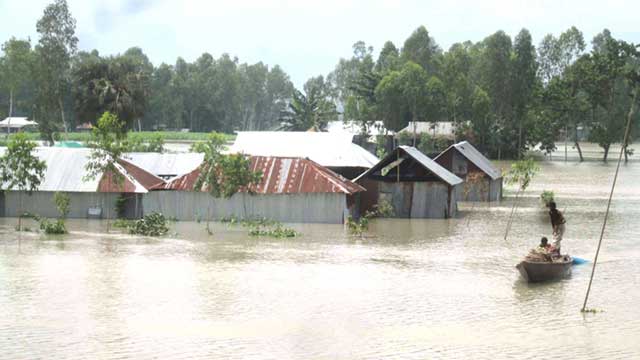 As many as 500 fish farmers in Sunamganj have suffered a huge loss, estimated at around Tk21 crore, in this year's floods that washed away their ponds.

After the floods inundated 2,846 ponds in the district, about 2,846 tons of fish from the ponds escaped into floodwaters, confirmed the Fisheries Department in Sunamganj.

According to the District Fisheries Office, persistent heavy rainfall upstream has flooded local haors and rivers 11 upazilas of the district.

The worst-hit upazilas are, Bishwamvarpur and Sadar, as over 2,000 ponds were washed away in the flood, said Md Abul Kalam Azad, fisheries officer of the district.

At least 1,21,743 fishermen have invested in these water bodies in the area and they will suffer a great loss because of the flood, said the officer.

Meanwhile, the recent flood has inundated 40% land areas, waterlogging at least 1,21,354 families and 3,265 hectares of land, said the local administration.