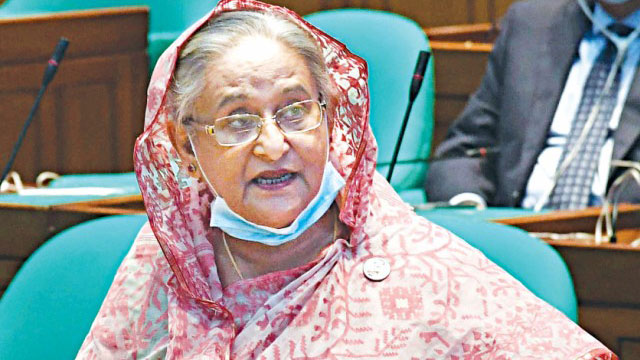 If independent MP Mohammad Shahid Islam, elected from Laxmipur-2, is a Kuwait citizen then his seat will be declared vacant, Prime Minister Sheikh Hasina said on Wednesday.

"We’re in talks with Kuwait (government) whether he (Mohammad Shahid Islam) is a citizen of Kuwait or not…we’ll look into it. If he’s a citizen of Kuwait, then we’ve to vacant his seat because law will take its own course. We’ve launched investigation against him in our country, too," she said.

The Prime Minister said this while taking part in an unscheduled debate initiated by BNP MP Hanunur Rashid.

The BNP MP raised the question of citizenship of Mohammad Shahid Islam arrested in Kuwait.

Hanunur Rashid cited news of various newspapers where Foreign Minister Dr AK Abdul Momen said Kuwaiti authorities detained Bangladeshi MP to face money laundering and human trafficking charges as a “local resident” of the Middle Eastern country as he was on a visit there without using diplomatic or official passport.”

She also said Shahid Islam somehow made his wife MP from a seat reserved for women. "But she’s not our nominated or elected MP."

Then, the Public Prosecutor of Kuwait had approached the Central Bank to freeze the bank accounts of Mohammad Shahid Islam. The financial balance of the company amounts to about 5 million Kiewit dinars, including 3 million dinars as company’s capital.

On June 25, Papul was sent to central prison of the country.

The Attorney General of Kuwait decided to imprison the Bangladeshi MP for 21 days in the central prison.

Earlier, the Anti-Corruption Commission (ACC) sought income tax documents of Mohammad Shahid Islam, MP, his family and his sister-in-law from the National Board of Revenue (NBR).

Deputy director of ACC Mohammad Salauddin sought the documents from NBR in connection with the MP’s alleged involvement in money laundering and accumulating illegal wealth.

Besides, it also served a notice to the Election Commission to get the electoral affidavit of MP Shahid and his wife Selina Islam.

The ACC earlier requested the Special Branch of Police seeking restriction on MP Shahid and his family’s foreign travel.

Earlier, on June 9, the ACC served notices to MP Shahid Islam, and his family members, seeking their wealth statements.

They were asked to submit their copies of passports, National Identity Cards, TINs and income tax returns within 15 days.