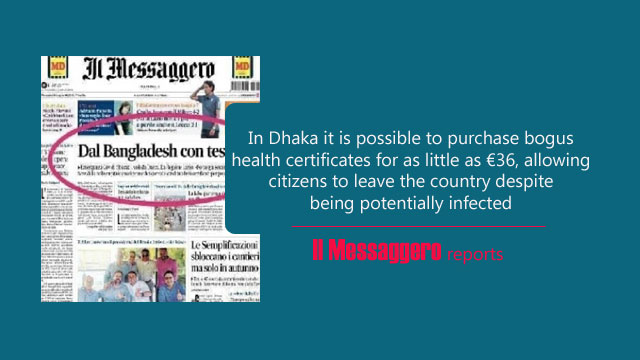 As many as 600 undetected Bangladeshis infected with Covid-19 have been circulating in Rome and around Italy, the Lazio Health Councillor Alessio D'Amato told Rome’s daily newspaper Il Messaggero.

''Our experts made calculations, based on the data obtained from the sample of passengers on the special flight arriving from Dhaka on Monday, in which 13% of the passengers tested positive," said D'Amato.

On Tuesday, Italy's health minister ordered a one-week suspension of flights to Rome from Bangladesh, after 21 passengers arriving from Dhaka tested positive, adding to the number of cases within the Bangladeshi community in the Lazio region surrounding Rome.

D'Amato called it a "veritable viral 'bomb' that we've defused."

"The result is very worrying: taking into account all the flights including those with a stopover that brought Bangladeshi migrants back to Italy, there are 500-600 positive cases that have not been intercepted, going around Rome and other regions," D'Amato told Il Messaggero.

D'Amato's estimate was backed up by Italy's deputy Health Minister Pierpaolo Sileri who told Radio 24: "The number of possible positives from Bangladesh is around 600, work is underway to trace these people to allow us to make epidemiological links and test everyone."

Regarding the July 6th flight from Bangladesh, in which 276 passengers were tested, D'Amato said: "For that flight alone, we employed 40 doctors and nurses for five hours, which means that air traffic also slows down significantly. The responsibility cannot be ours alone, every day thousands of non-EU passengers are arriving.''

‘Fake certificates available in Dhaka for €36’

Il Messaggero also reports that in Dhaka it is possible to purchase bogus health certificates for as little as €36, allowing citizens to leave the country despite being potentially infected.

This was confirmed to Il Messaggero by Mohammed Taifur Rahman Shah, president of the Ital-Bangla association which has been helping newly-arrived Bangladeshis in Italy for many years.

The Lazio Region is currently undertaking "blanket testing" for Covid-19 among the local Bangladeshi community.

Italian news agency Adnkronos reports that after a slow start on Monday, 300 Bangladeshis presented themselves for the voluntary tests yesterday, with "a hundred people" already in the queue outside the regional health offices this morning.

The Lazio region hosts around 37,000 of the 140,000 Bangladeshis in Italy, according to national statistics institute ISTAT. Around 32,000 of them live in Rome, according to Reuters.