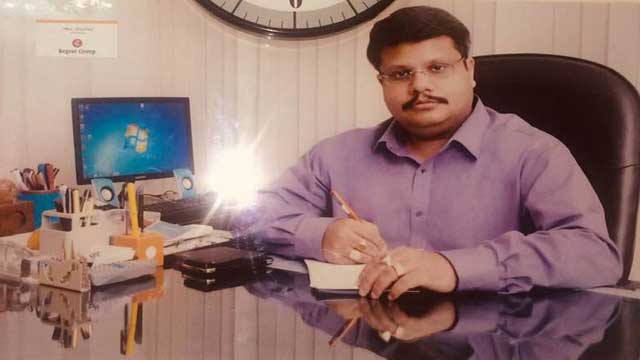 The contractor, Amlesh Ghosh, provided an audio recording to Dhaka Tribune in which Amlesh was threatened, reportedly by Md Shahed. In that recording, Md Shahed threatened he would shower Amlesh with false cases if Amlesh did not stop trying to get back his money.

Amlesh Ghosh is from Gobindadashi of Tangail's Bhuapur upazila. At the beginning of this year he entered into acontract with Regent KCS, an associate company of the Regent Group, for river dredging work in Natore.

Amlesh said when he asked for the money the Regent Group owed him, he received death threats. Police reportedly threatened him when he filed a case with Uttara police station in Dhaka, regarding the money owed to him. But police denied that any such threats were made.

Amlesh said: "I received threats from the offices of the Detective Branch (DB) of police and the Additional Superintendent of Police. I told them that I couldn't operate my excavators because of the unpaid money. They said I would be picked up from home if I didn't settle the matter (in ways other than following legal procedure).

"Then when I went to Uttara police station in Dhaka to file a case, police station Sub-Inspector, Bikash Kumar Pal, threatened me. I was told: "Do you have any idea of the reach of Shahed?" "Where do you get such courage?" Then when I filed an FIR (First Information Report) with great difficulty, Shahed told me that I won't be paid a penny and 10 cases would be filed against me.

"He told me that such cases will be framed so that I can never come out of jail. But I am a commoner, and I can not go to such lengths. But it's such a lot of money for me. Whom should I turn to?"

In the audio call record, one of the speakers, reportedly Shahed, told Amlesh: "If you go to many people and talk about it you won't get a penny, Let me see what you can do. I have heard you said that you will file a GD (general diary) against me. If I want, I can get to you. If I want I can frame you under the information act (now Digital Security Act). I would have to spend one or two lakh and you wouldn't get a penny."

Amlesh said: "Shahed took five excavators from me for the dredging work. The bill was Tk5 lakh. I was given Tk1 lakh. Now if Md Shahed is arrested, where is the guarantee that he wouldn't kill me after getting out? I request the authorities to provide security for my life. Shahed has men in administration, in police, and among political people."

Amlesh said: "I was given a pay-check without dates and couldn't withdraw the money owed. When I went to the Elenga branch (in Bhuapur) of Premier Bank, they said I need to call Shahed to get my money. I said I was given a check because the money is owed. I was refused despite going there 20-25 times. The situation is the same at the Uttara branch. I am sure he has connections with the bank officers."

His business partners said they are also victims of similar scams. There are accusations that Md Shahed tortured many after bringing them into his Dhaka office, saying that he would pay them the owed money.

One of the business partners seeking anonymity, said: "Shahed told me that to talk (negotiate) with his company we need to have connections with someone who is of the level of the city mayor."

The business partner also said that Shahed told him: "SP-DC (Superintendent of Police-Deputy Commissioner) is nothing. We have connections with ministers. You wont get your money. If you ask for it, no matter which corner of Bangladesh you stay in, we will get to you and make you disappear."

Another business partner said: "After I visited Shahed sir's residence, he showed me some of his photos with former Indian President Pranab Mukherjee, and photos with the home minister and the former president (of Bangladesh)."

The business partner claimed that Shahed said to him: "See, with whom I have connections? My reach is really long. You won't get a penny from us."

The business partner added: "On his orders, local influentials have often threatened us. We want security for our lives."

Regent Hospital owner Md Shahed is currently on the run. He is accused of forcing his employees to print out hundreds of fake Covid-19 results. He also billed the government huge sums for the treatment and care of coronavirus patients. In reality, no such service was provided.

Japan and South Korea have already restricted the entry of Bangladeshis after some of them, with documents certifying that they didn't have Covid-19, tested positive when they arrived in those countries.

The Italian government banned the entry of all passengers from Bangladesh, including Bangladeshi citizens, till October 5.

The move came on Thursday when a significant number of passengers on a special Biman Bangladesh Airlines flight tested positive for Covid-19, upon landing in Italy’s Rome on July 6.