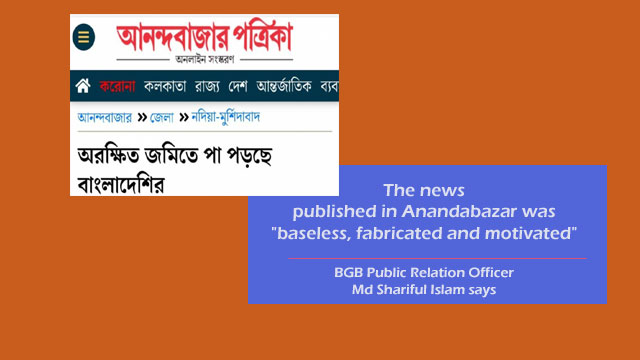 Border Guard Bangladesh on Friday protested against a report published in Kolkata-based Bengali newspaper Anandabazar, terming it as ‘baseless, fabricated and motivated.’

A BGB statement signed by its public relations officer Shariful Islam said on July 7 Anandabazar published a report titled ‘Bangladeshis stepping into unprotected land’ which is ‘baseless, fabricated and motivated’.

‘The newspaper mentioned the Raninagar border as the place of the incident but in fact, no incident happened there. The area is under the jurisdiction of Rajshahi BGB which extends from Charghat BOP to Talaimari BOP. The zero line crosses along the river Padma and there are vast chars on both sides,’ said the BGB statement.

‘The news says that Bangladeshis are cultivating uninterruptedly in Raninagar blocks 1 and 2 of the border and about 22,000 acres of unprotected land across Jalangi… the real picture is completely different.

‘Let alone cultivating inside India, it is now almost impossible to cultivate along international borders. BGB members are patrolling the border day and night along the zero line,’ it said.

‘The news said that Border Security Force of India detained two Bangladeshis after they crossed the border into Indian territory. Subsequently, Bangladeshi miscreants abducted two villagers from the Raninagar border village as ransom. But, the reality is quite the opposite and the published news is motivated,’ said BGB.

BGB statement further said that on July 2, two incidents took place at the Jalangi border, which is completely opposite to the report published by the newspaper.

‘Two Indian smugglers and residents of Jalangi border—Nayan Sheikh and Shahidul Sheikh—illegally crossed the international border around 11:30am on July 2. They trespassed into Yousufpur village inside Bangladesh territory and swooped on local people over narcotics dealing and financial transaction,’ it said.

‘Locals did not take the matter lightly and besieged them. On information the Yusufpur BGB took the two Indians into their custody out of concern for their safety,’ read the statement

‘On the other hand, around 12:00 noon on the same day, a BSF patrol team illegally crossed the international border and entered 300 metres inside Bangladesh (along Pillar 72/4-S) and took away three innocent farmers from Yusufpur area who were returning home after cultivating in the char area,’ it said

BGB said that a BGB-BSF flag meeting was held on the same day following the incidents and the matter was amicably settled on July 3 through peaceful transfer of citizens of both the countries.