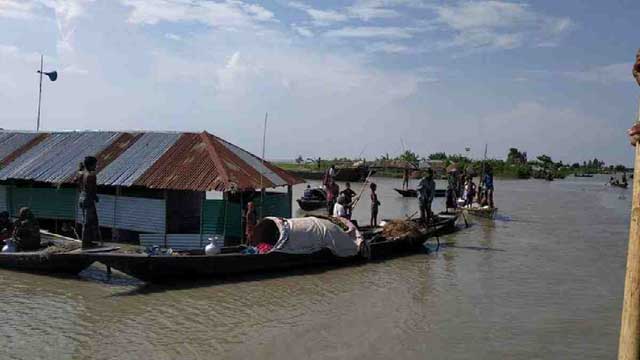 The flood situation in Kurigram district has deteriorated further as all the rivers continue to swell, leaving nearly one lakh people marooned.

The Brahmaputra River was flowing 45cm above danger mark at Chilmari point and 47cm above at Nunkhawa point and the Dharla river 82cm above in Dharla bridge point on Monday morning while the Teesta River is flowing along the danger line.

As flood water inundated vast areas more than one lakh people in 56 unions of 9 upazilas of the district have been marooned. Many people have take shelter on roads and dams as water entered their homes.

Water Development Board officials said initiatives are being taken to prevent erosion by dropping sand-filled GO-bags at 11 points.

Some 438 shelters, including schools and madrasas, have been prepared and police have taken necessary steps to maintain law and order there, he said.

Besides, 400 MTs of rice and cash Tk 11 lakh have been allocated as relief.