Stamford University students who worked with Sinha now in jail 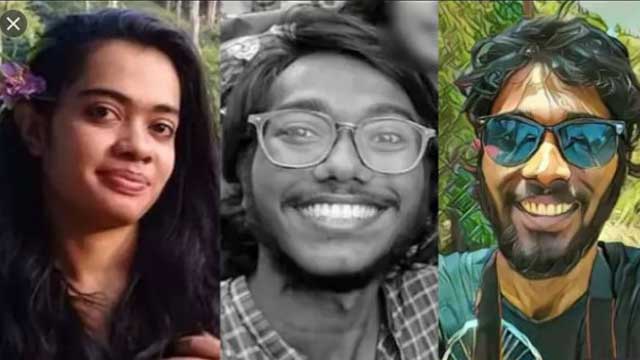 Two of the students -- Shipra and Sifat – are now in jail in two separate cases following the killing of Sinha.

Sinha went to Cox’s Bazar recently to make a travel documentary for his YouTube channel Just Go. Four people, including Sifat, Shipra and Tahsin, were with him. On 31 July, Sinha went to Teknaf’s Shamlapur hills with Sifat. While they were returning, policemen including inspector Liakat Ali stopped their car and asked them to come out. Once Sinha got out of his car, Liakat shot him three times, according to an intelligence report.

The teachers and guardians of the three said they had never imagined that these university students would have to undergo such circumstances.

SM Matiur Rahman, an associate professor of Stamford University’s Film and Media Studies department, told Prothom Alo, “Sifat and Shipra are third-year students while Tahsin is a final-year student. Whenever they get some free time, they engage themselves with the work of production. They have worked with many celebrities and even filmmakers. They were always decent and polite.”

“They are creative and calm in nature. They never forget their academic activities. Shipra attended an online exam last week,” he added.

Masum Billah, uncle of Sifat, is now staying in Cox’s Bazar to know the whereabouts of his nephew.

He told Prothom Alo that he had been aware of the documentary Sinha was making. Sifat was working behind the camera, Shipra was a director while Sinha was the producer.

“Supporting him mentally is the main task now. Besides, we’re trying to get him bail. He is a very quiet and introvert boy,” he added.

Shipra’s family had become speechless at her arrest, said one of her relatives.

Her father, Nabakumar Debnath, a retired official of Border Guard Bangladesh (BGB), alleged that his daughter had been framed in the case.

“The allegation against my daughter is untrue and concocted. Major Sinha was killed on 31 July and police informed me yesterday that my daughter was arrested,” he said.