‘Extrajudicial killings on the rise’ 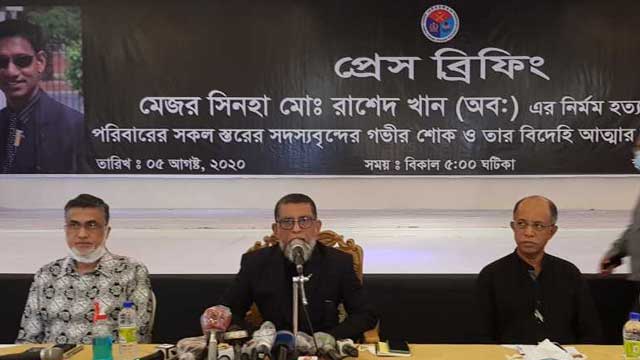 At a press briefing at the RAOWA Club in Mohakhali, Dhaka, on Wednesday, RAOWA Chairman Major (Retd) Khandaker Nurul Afsar demanded that the trial be completed and culprits punished within three months.

“All the people involved in Major (retd) Sinha’s murder should be arrested and sent to jail,” the chairman said.

He also said the superintendent of police (SP) of Cox's Bazar should be withdrawn immediately and face legal action for misrepresenting the incident.

The SP made false statements before the media, concealed information and filed two false cases against Sifat, the only eye witness to Sinha’s murder, according to the RAOWA chairman.

Furthermore, the association demanded that Teknaf police station OC Pradeep be sent to jail, and that the safety of all witnesses and their families be ensured so that they are not subjected to pressure.

RAOWA also asked for the formation of a separate ministry (Veterans Ministry) to ensure support for retired members of the Armed Forces, much like in other countries around the world.

Additionally, the association said that there should be no political malpractice over this incident and stated that its members wanted to meet with the president, prime minister and home minister for assurances in this regard.

“If our demands are not met, we will be forced to take to the streets,” Khandaker Nurul Afsar said.

RAOWA member Lt Gen (Retd) Md Mainul Islam said: “A person does not need permission to walk on a street. Marine Drive is a public road. A crime has been committed and the culprits must be punished.

“Eyewitnesses say that Sinha raised his hand and came out of the vehicle. This means he surrendered himself. He was then in police custody. But as soon as he raised his hand and came out, he was shot dead. He was killed in police custody.This is not only a violation of the law, it is also a violation of the constitution,” he added.

Colonel (Retd) Mahmudur Rahman Chowdhury said extrajudicial killings had been on the rise and there were many stories related to such incidents.

“If an inspector decides to kill someone, what does the law, judiciary, government or state do? This [extrajudicial killing] needs to stop. We need to ensure justice and quickly at that,” he added.