17 die as trawler capsizes in Netrokona 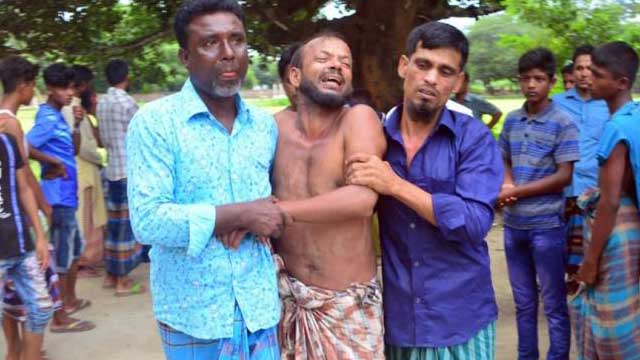 At least 17 people, mostly madrassah students and teachers, drowned as a trawler capsized due to strong wind and current in a haor at Madan upazila in Netrokona on Wednesday.

One madrassah student remained missing till filing of this report.

The victims include seven children aged seven to 16 years.

The bodies were handed over to their respective families, said Madan police station sub-inspector Shamsul Islam.

According to the Madan police station officials, some madrassah teachers and their students from Kolapara and Char Bhabanipur villages under Mymensingh sadar came to Uchitpur for seeing the haor.

They got into a trawler around 11:30am with a total 48 passengers on board and at around 11:45am the trawler capsized due to strong current.

Madan Upazila Nirbahi officer Bulbul Ahmed told New Age that the incident happened around noon at Rajali village area under Gobinda Sri union of the upazila when a group of madrassah students and teachers took a boat ride in the hoar.

He said that the students and their teachers came to see the haor’s Uchitpur spot, which was locally known as ‘mini Cox’s Bazar’.

‘It’s a tourist spot. The group was joined by some people from Atpara area of Netrakona,’ he said.

On the day between 11:00am and 12:00pm there was strong wind, which created strong current on the haor water, he said.

He said that primarily they assumed the trawler capsized while taking a turn.

‘There were 48 people on the boat. We rescued 30 people and 17 bodies and one person remained missing,’ said the UNO, adding that all rescued people were in good condition.

‘We called off the rescue operation as night fell and there were strong current and wind on the spot,’ he said, adding that they would decide if rescue operation could be resumed in the morning.

The capsized trawler was recovered from the spot, he said.