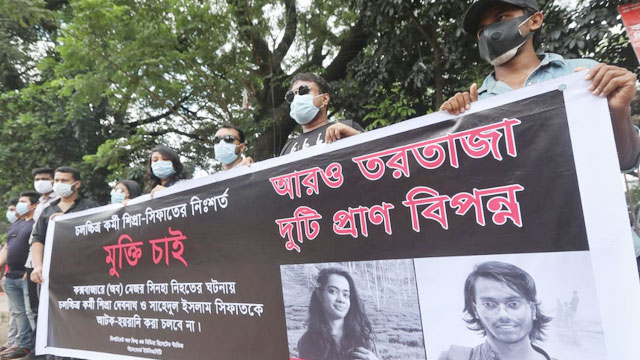 The two were working with the now-deceased retired major to make a documentary. Following the incident in Cox's Bazar that took Sinha’s life, they were arrested in connection with the case

Students of Stamford University’s Film and Media Studies Department have demanded the release of Shahedul Islam Sifat and Shipra Rani Debnath, who have been arrested for narcotics possession by the police in Cox’s Bazar following the killing of retired Bangladesh Army Major Sinha Md Rashed Khan.

The students formed a human chain in front of the National Press Club on Thursday morning to protest their arrests.

They acknowledged that Sinha, who was shot dead by the police on Marine Drive in Cox's Bazar on July 31, lost his life in a possible case of murder.

However, they claimed that freelance photographer Shahedul Islam Sifat and film maker Shipra Rani Debnath, students of the film and media department at Stamford University Bangladesh, are completely innocent.

The two were working with the now-deceased retired major to make a documentary. Following the incident in Cox's Bazar that took Sinha’s life, they were arrested in connection with the case.

“We don’t understand how Sifat and Shipra can be accused if it’s confirmed that Sinha was shot dead by the police. They are falsely accused,” said one student.

“Both Sifat and Shipra are very passionate about their work. They are known as calm, well-behaving students,” said another.

“We have some practical courses every semester that require students to work with different projects to gather practical experience. Some of us even bear our educational expenses through the earnings from such projects.”

“As colleagues and classmates, we are concerned and apprehensive about the safety of Sifat and Shipra in the current circumstances,” added another student taking part in the protest.

Sinha was killed in a police firing at Baharchara police outpost on the Marine Drive Road Teknaf, Cox's Bazar on July 31.

Shahedul Islam Sifat and Shipra Rani Debnath were arrested in connection to the incident and separate cases were filed against them.

On August 2, the authorities suspended 21 police officers, including the in-charge of Baharchara police outpost, in connection with the killing.