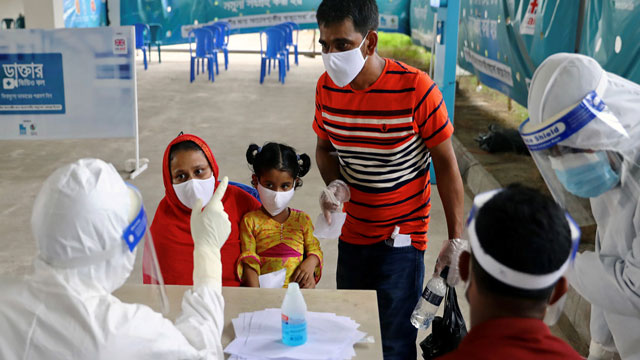 A study jointly conducted by the Institute of Epidemiology, Disease Control and Research and the International Centre for Diarrhoeal Disease Research, Bangladesh found that about nine per cent Dhaka city dwellers could be COVID-19 positive.

The IEDCR and ICDDR,B revealed the preliminary finding of the study late on Monday, which suggested that the rate of COVID-19 infection is relatively low among the slum dwellers.

Only six per cent of slum dwellers tested as part of the study were found COVID-19 positive, according to the study.

It identified 211 symptomatic individuals, and 199 of them were tested for the novel coronavirus using RT-PCR testing method.

An additional sample was collected from 720 households of six slums in Dhaka city.

Overall, nine per cent among all individuals in Dhaka on the day of the visit was estimated as RT-PCR +ve, it said.

Only one death was reported among all the COVID-19 cases under the study with one month of follow-up.

According to official figure, Bangladesh has currently 2,60,507 confirmed cases of coronavirus.

With an estimated 20 million population in Dhaka, the study now suggests, the capital alone has now around 18 lakh cases of coronavirus.