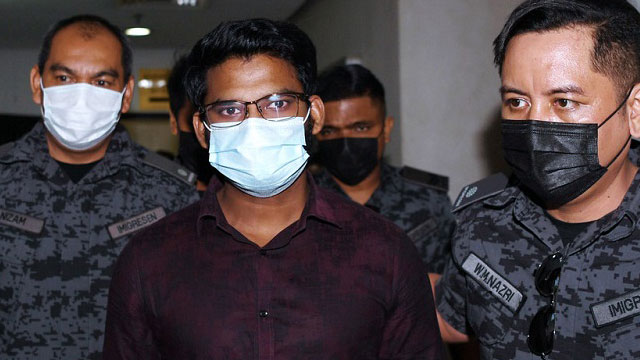 This in turn maintains the remand detention of the 27-year-old for 13 days starting August 6 continued.

Rayhan’s lawyer, Sumitha Shaanthini Kishna, told the Free Malaysia Today that the High Court upheld the remand based on the grounds of “national integrity,” as stated in the Immigration Department’s application.

A Malaysian court has remanded Rayhan on August 6 for another 13 days.

“We applied for revision of that order based on the argument that his (original) 14-day remand upon his arrest (on July 24) is sufficient to conduct the necessary investigation,” Sumitha said.

Malaysian national news agency Bernama reported that High Court judge Ab Karim Ab Rahman said the 13-day remand was “appropriate” on the grounds that the remand of Rayhan “involved the integrity of the country.”

However, he could not confirm the date of Rayhan's deportation and said the Dhaka-Kuala Lumpur flight may resume after August 31.

On July 25, the Malaysian Immigration Department confirmed that Rayhan had been arrested by its intelligence unit the day before in the Setapak area, following a two-week manhunt.

Rayhan was featured in Al Jazeera’s 101 East program “Locked Up in Malaysia’s Lockdown,” which alleged mistreatment of illegal immigrants in Malaysia during the process of tackling the Covid-19 pandemic.

On July 29, two lawyers representing Rayhan said he had expressed willingness to go back to Bangladesh.

The lawyers said Rayhan had “apologized” for his statement in the interview with Al Jazeera, which was made since he was emotional after seeing his friends detained in raids against undocumented migrants in May.