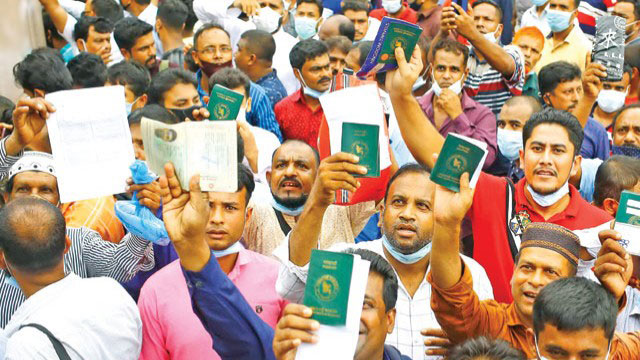 Several thousands of Bangladeshi migrant workers have been struggling in Dhaka for the last couple of days to confirm their return tickets for their workplaces in Saudi Arabia as the Middle Eastern country was set to operate its flights from Dhaka following the COVID-19 restrictions.

The Saudia Airlines office in Dhaka started confirming their tickets on Sunday while Biman Bangladesh Airlines got slots from the Saudi airport authorities to run its flight.

On Monday morning, several hundreds of Saudi-bound passengers gathered at the Saudia airlines office in the capital’s Karwanbazar to secure their tickets.

Huge gathering were seen in front of the office leading authorities to deploy police to manage the crowd.

Police inspector Taiyabur Rahman said they were there to maintain law and order.

Habibur Rahman, who has been working in Saudi capital Riyadh for over two decades, said he was supposed to return on April 29, but could not go.

As he came to know that the flight would be operated soon and tickets to be confirmed, he approached the Saudia Airlines office on Sunday and could collect a token after waiting over 12 hours. He said his visa would expire on September 30 and would face trouble to get it, in case he missed the flight.

Like him, Abdus Salam arrived at the airlines office from Sylhet on Sunday and collected a schedule token to confirm his ticket.

‘I got my appointment for October 7, but visa will expire on September 30. I do not know where I should go for the remedy,’ he added.

Saudi Arabia opened international flight operations on Tuesday. The security personnel at the Saudia Airlines did not allow getting into the office.

The Civil Aviation Authority of Bangladesh officials said they have given permission to Saudi Arabian Airlines to operate two weekly flights from Dhaka and CAAB were set to operate their flights from September 23 onwards.

The Bangladesh government suspended regular flight operations with all countries, except China, from mid-March to contain COVID-19 spread.

Although regular air communications with some countries resumed on a limited scale, regular flight operations between Bangladesh and Saudi Arabia remained suspended till date.

Saudi Arabia is home to more than 22 lakh Bangladeshis most of whom are involved in low-paid work.