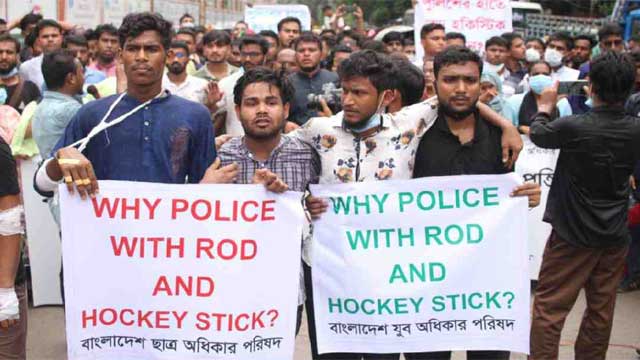 The activists of the student organization staged demonstrations in front of National Press Club protesting the filing of the case, ‘police action’ against Nur and others .

They placed a three-point demand during the demonstrations.

Farukh Hasan, joint convener of the student platform , said, " We have placed three demands: withdrawal of the case filed against us, state must bear the treatment cost of the victims who were injured during police action yesterday, and no obstruction in our peaceful movement.”

The protesters brought out a procession from Doyel Chattar around 11:30am and staged demonstrations in front of the Jatiya Press Club.

Faruk also said, "At least 30 of our activists were injured during the attack yesterday. Of them, 10 sustained severe injuries and they were taken to different hospitals. Four of us fell sick and they will be taken to hospital too."

On Monday night, Nur and six members of the platform were detained for protesting the filing of the case. They were released later.