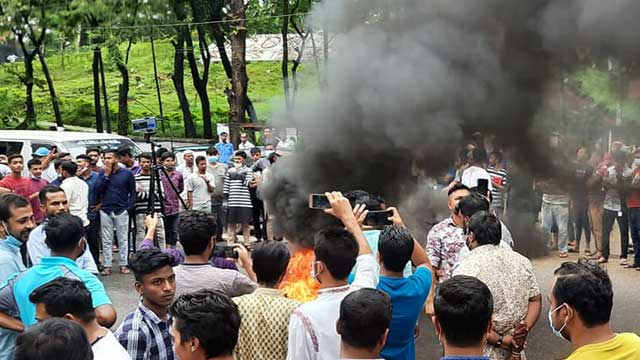 Protesters under the banner “General Students” congregated outside the college main gate and began observing their demonstration since 12pm.

During the protest, the students burned tires and obstructed the Sylhet-Tamabil Highway which halted vehicular movement completely.

Police personnel were deployed to avoid any untoward situation in the area.

The students withdrew from their demonstration after an hour at 1pm after receiving assurances from college principal Saleh Ahmed of exemplary punishment for all those involved in the heinous crime.

Saleh Ahmed said a three-member committee has already been formed by the college authority to ensure a proper investigation into the incident.

A woman was raped allegedly by Chhatra League men at the premises of the hostel of Sylhet's MC College, when she was visiting the place with her husband on Friday night.

According to sources, a group of Chhatra League men confined the woman's husband in a room and gang-raped the woman.

Police rescued the couple from the hostel premises and admitted the woman to the One Stop Crisis Centre of Sylhet’s Osmani Medical College Hospital on Friday around 10:30pm

The victim's husband filed a case against seven to eight people, naming six at Shahporan police station in connection with the incident.

He said: "We still couldn't identify the suspects of the incident. But an investigation is going on."