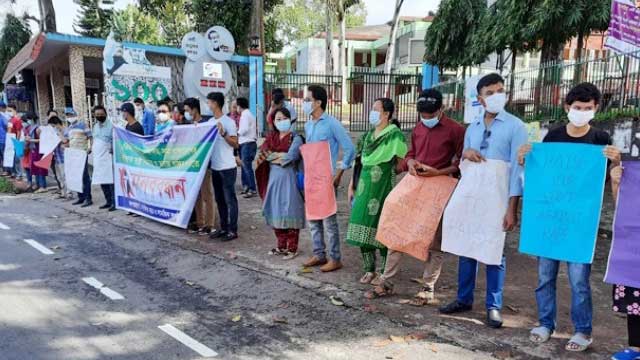 Police today said the arrestees in a case filed over the gang-rape of a Chakma woman in Khagrachhari on Thursday have primarily confessed to their involvement in the crime.

"The arrestees have also primarily confessed that they raped the Chakma woman and looted valuables from her house," said Mohammad Abdul Aziz, superintendent of police in Khagrachhari.

The victim's mother today identified three of the culprits, aged around 20-22, at Khagrachhari Police Station after she was taken there, the SP said.

Two of the culprits identified by the victim's mother are Shahin and Faruq while she identified the third by his face, he said.

"Among the three, she heard the rapists call Shahin and Faruq by their names on the night of the incident," SP Abdul Aziz said.

"The nine rapists, aged around 20-22 with sharp weapons broke into my house, tied me and my second husband up, and raped my daughter," the victim's mother said.

"Among them, Faruq also beat me mercilessly," she said.

She also said her daughter had been mentally traumatised after losing her brother and father in 2005 and 2006.

"The criminals raped the girl and looted cash and gold ornaments from the house. It was a brutal incident," the SP said.

The SP confirmed that all the culprits are from the Bengali community in the district.

The police official, however, did not disclose the number of people arrested over the incident, but said all of them are from different upazilas of Khagrachhari district.

"We will disclose the identities of the rapists' tomorrow morning," he added.

Incidents of violence against women and children have become frequent in Chattogram Hill Tracts (CHT) region due to the culture of impunity, ASK said.