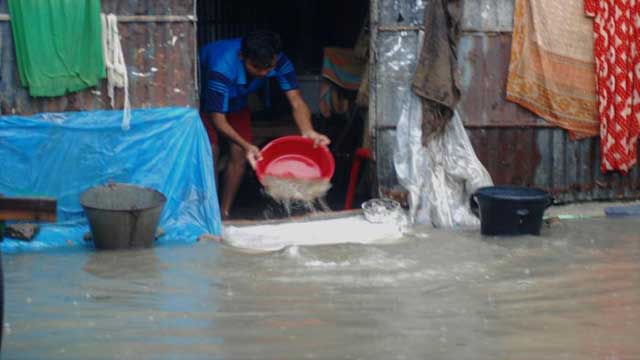 About 15,000 hectares of cropland has gone under water in nine upazilas of Kurigram during the fifth phase flooding triggered by onrush of upstream water and heavy downpours.

The amount of damage incurred by farmers was not immediately clear.

A large-scale destruction of crops could potentially cause a shortage in the local market and trigger price hike.

He said it would take them about a week to estimate the loss.

“A total of 15,000 hectares of cropland containing Ropa Aman, peanuts, vegetables, among others, went under water in the district,” Mia said.

Meanwhile, road communication has been snapped in many parts of Kurigram.

In some places, people took shelter on high roads and embankment with their livestock.

Besides, a number of houses were washed away by the strong current of Dharla River while erosion took a serious turn in many areas, putting houses, educational institutions, roads and flood protection dam at risk.

Moinuddin Bhola, a UP member of Jatrapur Union in Sadar upazila, said the authorities did not take any action even after the river gobbled up at least 10 houses in Garuhara village.

Kurigram Water Development Board Executive Engineer Ariful Islam said Dharla was flowing 28cm above its danger level in the morning. Sixteen rivers in the district are flowing beneath the danger mark.

“Erosion took a serious turn at 20 points of Brahmmaputra, Dharla, Dudhkumar and Teesta rivers and the work to protect the riverbanks is underway,” said Islam.

Flood showed no sign of improvement in the last couple of days. Kurigram District Relief and Rehabilitation office said 12MT rice and 2,000 packets of dry food were distributed among the flood-hit people.