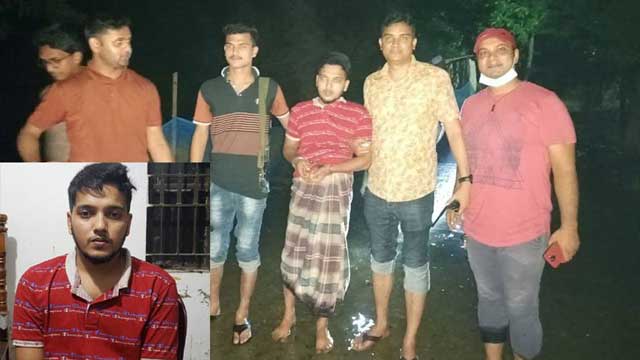 Police arrested another accused from Haripur of Jaintapur upazila on Monday night in connection with Friday’s gang-rape at Sylhet MC College.

The arrestee is Mahfuzur Rahman Masum, a 4th year student of the college and son of Salik Ahmed of Lama Doloikandi village of the Kanaighat upazila.

Shamsuddoha, officer-in-charge of Kanaighat Police Station, said a team of police arrested Mahfuzur from the area around 10 pm.

Later, they handed him over to Shahporan Police Station around 11pm. He was brought to the office of the superintendent of Sylhet police around 10am on Tuesday.

With the arrest of Mahfuzur, seven accused have so far been arrested.

Among the arrestees, Saifur Rahman, Arjun Lashkar and Robiul Islam were placed on a 5-day remand each on Monday.

A group of youths tied up a man and raped his 19-year-old wife at the MC College dormitory on Friday night.

After police rescued the couple, the victim’s husband filed a case at Shahporan Police Station in the early hours of Saturday against nine people mentioning the names of six.