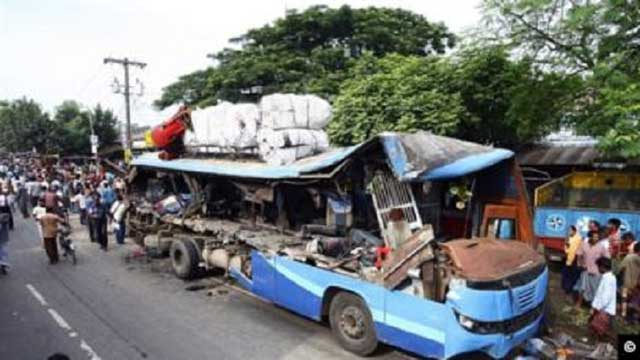 Road accident in Bangladesh is still one of the leading causes of deaths as 37,170 people were killed in 26,902 accidents across the country in the last five years.

Besides, 82,758 people were injured in these accidents, according to a report released by Bangladesh Jatri Kalyan Samity (BJKS) on Wednesday, marking the National Roads Safety Day on October 22.

However, the association claimed that many reports of road accidents are not published in newspapers.

These figures show that the number of casualties in road accidents in Bangladesh is increasing due to reckless driving and dangerous overtaking, said the report.

BJKS said that the desired development of roads is not yet visible even after the enactment of the Road Transport Act of 2018.

Traffic chaos, anarchy, random fare hike and harassment of passengers still remain the same as before. As a result, passengers’ suffering, traffic jams and road accidents are increasing day by day, the report added.

Amid this chaotic situation on Bangladesh’s roads, BJKS considers it inappropriate to observe the National Roads Safety Day.

It said the road safety issue no longer be limited to just observing a particular day as there is a need for implementation of the election pledge of the government to ensure safe roads for people on an urgent basis.