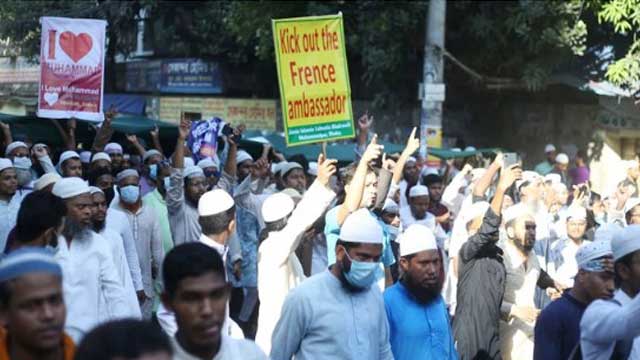 Thousands of leaders and activists of different Islamist organisations on Friday rallied in Dhaka and elsewhere in the country protesting against French president Emmanuel Macron following his criticism of Islam.

Speakers in the demonstrations urged the people to boycott French products and called on the government to lodge strong protest against France officially and cut diplomatic ties with France, passing condemn motion in the Jatiya Sangsad against France.

Protesters urged the French president to seek apology to the Muslims of the world for his comments and withdraw the caricatures immediately.

The protesters carried posters reading ‘Boycott France’, ‘Stop Islamophobia,’ ‘Freedom of speech is not freedom to abuse’, ‘Respectable prime minister, boycott France’, ‘Macron will pay a high price,’ ‘France is against humanity’, ‘All Muslims of the world, be unite against France’, etc.

Some protesters carried effigies of the French president with garland of shoes around its neck.

In Dhaka, Samamana Islami Dalsamuha, a combine of six Islamist organisations, held a protest rally in front of Baitul Mukarrom National Mosque after Jumma prayers and then brought out a procession.

Combined Islamic Parties, another group of Islamic parties, brought out the procession from the same venue after Jumma prayers and held a rally near Nightingale crossing in the city.

A protester at the rally in front of the Baitul Mukarrom had been chanting slogan writing ‘I have no grief if I can sacrifice my life for the prophet’ on his chest while many were seen beating Macron’s photo and his effigy with shoes.

Addressing the rally as the chair, Samomona Islami Dalsamuha convener and Jamiat-e-Ulamaye Islam Bangladesh secretary general Nur Hossain Kashemi urged all to boycott French products and urged the government to take immediate action to cut diplomatic ties with France showing respect to the sentiment of Muslims.

Also a leader of Hefazat-e-Islam Bangladesh, Nur announced that the Dhaka city unit of Hafazat would march towards French embassy in Dhaka from Baitul Mukarrom on November 2 at 11:00am to besiege the embassy.

During the procession, the protesters burnt the effigy of Macron at Paltan Intersection in the city.

Police said that about 20,000 protesters took part in the protests by the two Islamist groups.

Islami Andolan Bangladesh held a protest rally and brought out a procession in Dohar, on the outskirts of Bangladesh.

In Chattogram, several thousand protesters under the banner of Hefazat-e-Islam held a rally at Jamiatul Falah Jame Masjid at Dampara area after Jumma prayers.

In Magura, Hefazat held a protest rally at Nomani Maidan in the district town after Jumma prayers and brought out a procession that ended at Chourongi intersection.

In recent weeks, French president Emmanuel Macron accused Muslims of ‘separatism’ and described Islam as ‘a religion in crisis all over the world,’ coinciding with the republication of cartoons on the Prophet Muhammad and Islam by Charlie Hebdo, a French satirical weekly magazine, according to international media.

The French president defended Charlie Hebdo’s right to publish the cartoons which led to an outcry among the Muslims across the world.