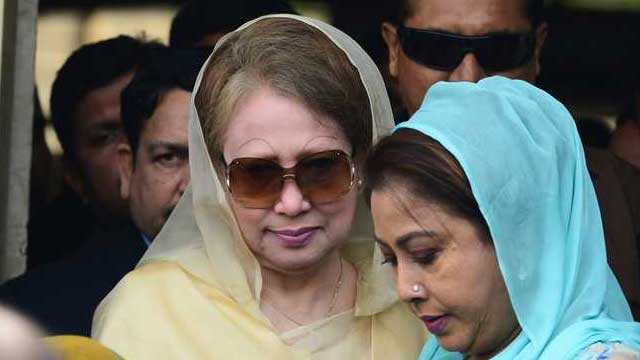 The bench of Justice M Enayetur Rahim and Justice Shahidul Karim set next Sunday, 2:00pm, to hear her bail petition in the case.

The bench stayed the lower court fine of Tk 2.10 crore on Khaleda Zia and asked it to forward the case records before it within 15 days.

Earlier today, she filed a separate bail petition with the High Court in the case. The 880-page petition mentioned 31 grounds, one of her lawyers Advocate Sagir Hossain Leon, told The Daily Star.

In the appeal, Khaleda Zia prayed to the HC so that it asks for the records of the case from the trial court, grants her bail until the plea is disposed of, and acquits her of the corruption charges.

After receiving the appeal on Tuesday, the HC bench fixed today (Thursday) for the hearing.

On February 8, Special Judge’s Court-5 of Dhaka sentenced Khaleda Zia to five years’ imprisonment after it found her and five other accused guilty in the case.

The special court in its judgment also sentenced Khaleda Zia’s eldest son and BNP Senior Vice Chairman Tarique Rahman and four others to 10 years’ imprisonment, and fined Tk 2.10 crore each.

The other convicts are KaziSalimulHaque, ex-BNP lawmaker from Magura; Sharfuddin Ahmed, a businessman; Mominur Rahman, a cousin of Tarique; and Kamal Uddin Siddique, former principal secretary to the PM.