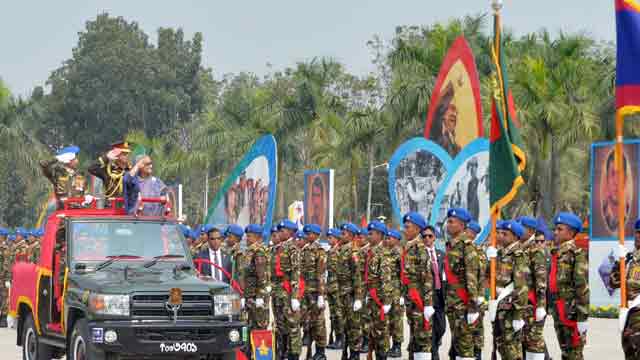 Natore, Feb 22 (Just News): Prime minister Sheikh Hasina on Thursday directed the officers and soldiers of Bangladesh Army to stay ready always to address any external and internal threat to the country's constitution and sovereignty.

"You'll have to keep a constant vigil to face any internal and external threat to safeguard the country's constitution and sovereignty," she said while addressing a parade of the 6th Reunion of the Bangladesh Army Engineer Corps at the Engineer Centre and School of Military Engineering (ECSME) at Qadirabad Cantonment.

The prime minister said the army will have to play an important role in building a modern, developed, happy and prosperous Bangladesh alongside upholding country's democratic and constitutional continuation.

"You'll have to keep the trend of democracy and constitution and make more important contributions to establishing a modern, developed and prosperous Bangladesh," said Hasina, also president of ruling Awami League.

She also put emphasis on maintaining peace and discipline in the country, saying her government does not want anyone to get involved in terrorism, militancy and drug addiction. "You must remain alert so that the country's law and order is maintained."

Praising the role of army in the country's development, Sheikh Hasina said members of this force earned trust and confidence of all through their integrity, efficiency and various welfare-oriented activities.

She said their glorious role in the UN peacekeeping missions has brightened Bangladesh's image across the world while the armed forces has set a unique example in facing natural disasters as well as providing help and assistance for the affected people during any accident. "Bangladesh is now a 'brand name' in maintaining peace in the UN peacekeeping missions which is a matter of pride for the country."

Appreciating the army for their works for the forcibly displaced Myanmar nationals who fled to Bangladesh, the prime minister said their activities have further brightened the country's abroad.

She said her government continues its efforts for further development and modernisation of the force through formulating forces goal-2030 following the defence policy of Bangabandhu.

The prime minister described the corp of engineers as a very important and a traditional organisation of the army.

Hasina urged all to work together to establish Bangladesh before the world as a dignified country, saying various development projects are being implemented with country's own resources and none can now neglect Bangladesh.

She said her government has established Bangladesh as a digital country and it has now entered into the era of 4G network from the 3G.

Bangladesh is now marching ahead keeping pace with the world as Bangladesh Army has also been playing very important role in its overall development, she said.

The prime minister said the government has taken various measures for turning the professional armed forces into world-standard modern forces imbued with the Liberation War spirit.

Elaborating the government's tremendous achievements in different fields, she said the aim of her government is to ensure development and people's welfare.

Hasina said Bangladesh is going to be elevated to a developing country from the least developed one as it has already fulfilled all criteria in this regard. "We'll turn Bangladesh into a middle-income country by 2021 and a developed one before 2041 Insha Allah," she said.

The prime minister expressed her optimism that huge experience, guidelines and advices of the seniors at the reunion will inspire members of the army of the new era to work with honesty, patriotism and dedication.

Hasina was given a guard of honour by a smartly turned out contingent of the army. She took salute at the parade, and inspected the parade riding an open jeep.

Earlier on her arrival at the ECSME Parade Ground, Hasina was received by chief of army staff General Abu Belal Muhammad Shafiul Huq and the colonel commandant and the commandant of the ECSME.