4 of a family die in Narayanganj fire 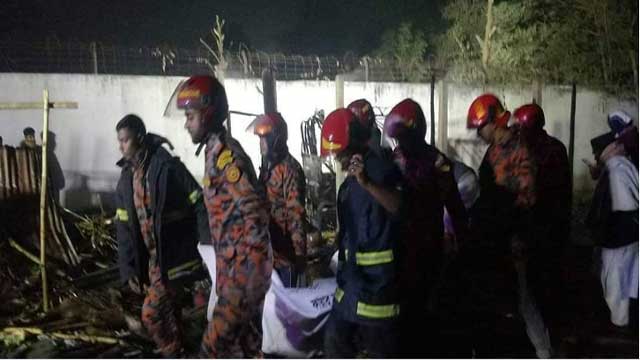 Four members of a family including two children died on Friday night after a fire broke out in Narayanganj.

The accident took place at Kumartek village in Sector 11 of Purbachal area under Rupganj upazila around 9:15pm on Friday.

Upon receiving the news, three units of Purbachal Fire Service reached the spot and managed to put out the fire in about half an hour.

The deceased were identified as Masum Mia, 40, a local resident of Kumartek area in sector 11 of Purbachal, his wife Seema Akter, 32, and two sons Rahmatullah, 18, and Abdullah Russell, 12.

Fire service authorities are speculating that the fire broke out from an electrical short circuit.

According to the fire service and police sources, the accident took place in Kumartech area around 9pm.

Originally a Desco wire connection was taken through here and another line of Polli Biddyut Samiti was taken under that.

At around 9pm on Friday, the Desco wire was torn and fell on the Polli Bidyut wire.

The wires fell on the house of Masum Mia, which was below, a fire broke out from an electrical short circuit.

Three people, including the father and the two sons, died on the spot. Their bodies were burnt when the fire broke out.

Upon receiving the news, the fire service rescued the wife Seema Akhter in a critical condition and sent her to Rupganj Upazila Health Complex where the doctor on duty declared her dead.

Uddipan Bhokto, station officer of Purbachal Multipurpose fire service, told Dhaka Tribune: "We went to the spot at 8:45 pm after receiving the news. Three people, including the father and two sons, were burnt to death and one was injured."

“It is believed that two wires fell on the house of Masum Mia and caused a fire by an electrical short circuit. The fire has been brought under control and could not spread to nearby houses,” he added.

Rupganj police OC Mohsinul Quader said that it has been confirmed that four members of the same family were killed when the electric wire tore apart and caused a fire. The burnt bodies of house owner Masum Mia and his two children were recovered from the spot.

Masum Mia’s wife Seema Akhter, was burned severely, and was taken to the hospital where the doctor declared her dead.

He added that investigation in going on in the incident.