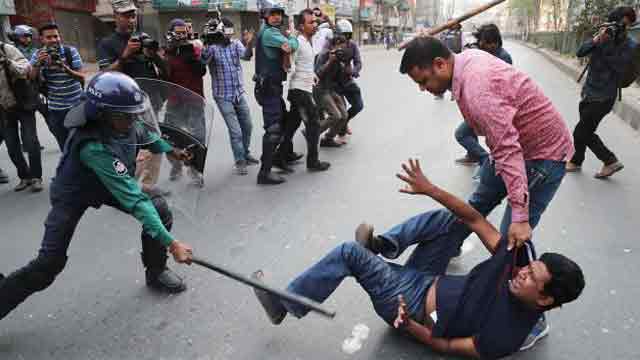 Dhaka, Feb 23 (Just News): The right to freedom of peaceful assembly and freedom of expression in Bangladesh continues to be severely restricted, says Amnesty International.

In its annual report for 2017 released on Thursday, the London-based rights group observed that enforced disappearances were routinely carried out by security forces, mainly targeting supporters of the opposition.

"Concerns increased about the growing interference by the government in the judiciary," Amnesty said referring to the exit of former chief justice SK Sinha under circumstances that indicated executive interference following the Supreme Court verdict cancelling the 16th amendment to the constitution.

The rights organisation also pointed out that the strategy to combat violence by armed groups continued to be marked by human rights violations.

More than 80 people were forcibly disappeared during the year, according to Amnesty.

"Attacks against journalists continued, with a number of physical assaults on journalists reported," the Amnesty report said.

It mentioned that the government reiterated its intention to introduce the 'Digital Security Act', which, it added, would restrict further the right to freedom of expression online.

"The government continued to use repressive laws to unduly restrict the right to freedom of expression, and to target and harass journalists and human rights defenders."