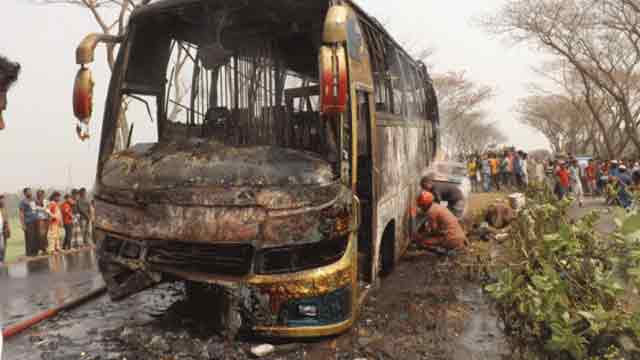 Dhaka, Feb 23 (Just News): At least 12 people died and 25 others were injured in separate road accidents in Natore, Mymensingh, Sirajganj and Feni today.

In Natore, three persons were killed when a bus ran over their motorcycle on Bonpara-Hatikumrul road in Gurudaspur upazila of the district around 12:30pm.

In Mymensingh, four people including two women were killed and 25 were injured when a bus skidded off the road in Ishwarganj upazila on the Mymensingh-Kishoreganj highway around 10:00am.

Badrul Alam Khan, officer-in-charge of Ishwarganj Police Station said the bus was trying to save a bicycle when the driver lost control.

The deceased were identified as Ratan Mia, 28 and Rezia Khatun, 35 of Ishwarganj upazila, passengers Hadis Mia, 35, of Nandail and Hasina Khatun, 75, of Jamalpur.

In Sirajganj, three motorcyclists were killed as a bus ran them over on Bonpara-Hatikumrul road in Kachikata area of Gurudashpur upazila this afternoon, reports UNB quoting JM Shamsur Nur, officer-in-charge of Bonpara Highway Police Station.

The identities of the deceased could not be known yet. The accident took place around 12:45pm when the bus hit the motorcycle, leaving the trio dead on the spot.

In Feni, a mini truck driver and his helper died on the spot after a covered van collided with the truck on the Dhaka-Chittagong Highway at Sanua in Sadar upazila around 8:30am, reports Bangla daily Prothom Alo quoting Feni’s Muhuriganj Highway Police.