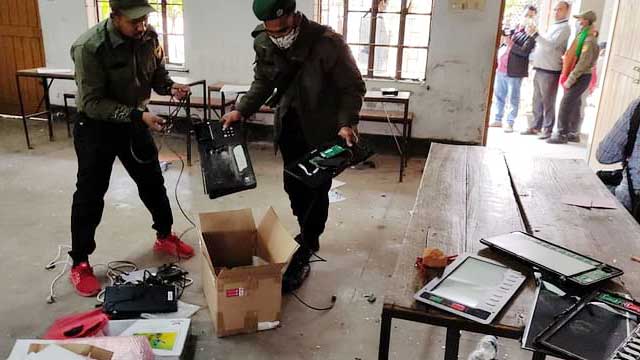 At least two people were killed as voting in Chattogram City Corporation polls ended on Wednesday amid sporadic clashes and allegations of rigging.

At Ambagan in the city's Khulshi area, a man was shot dead and five others sustained bullet injuries in a clash between two factions of Awami League, reports United News of Bangladesh.

The deceased was identified as Alam Mia, 28, son of Sultan Mia of Cumilla district.

Five other people also sustained bullet injuries during the incident.

Quoting the witnesses, the agency reports said the supporters of Awami League-backed councillor candidate of Ambagan ward Mohammad Wasim and Awami League rebel candidate locked into an altercation over the election at Ambagan area during balloting.

At one stage, both groups fired bullets, triggering a chase and counter chase.

Alam along with five others sustained bullet injuries during the incident. Later, they were taken to Chattogram Medical College and Hospital.

Zahirul Islam, in-charge of Chattogram Medical College and Hospital police outpost, said six people with bullet injuries were brought to the hospital and of them, Alam was pronounced dead around 10:00 am.

In Pahartali, a young man was killed in an attack reportedly by his brother over a dispute cantering the election.

The deceased was identified as Nizam Uddin Munna, 35, a resident of Pahartali.

The siblings used to lock into altercations over the election.

Alahuddin Talukdar, a sub-inspector of Chattogram Medical College and Hospital police outpost, told New Age that at least 30 people injured in election-related violence in different areas of the city took treatment at the hospital since morning.

Meanwhile, BNP-backed mayoral candidate Shahadat Hossain in the election alleged that his polling agents were ousted from almost all centres.

After casting his vote, he alleged robbing of votes and said that the administration was engaged in tricks so that the ruling Awami League candidate could win.

He, however, said that he would stay on the poll until the last minute to show irregularities in the elections to the world.

He exercised his voting power at B Ed College Polling centre at Paschim Bakalia in the city at about 10:00 am.

Seven candidates are running for the mayoral post in polls.

Though there is a huge presence of leaders and activists of ruling Awami League and its front organisations outside the polling centres in the election, there is a very thin or almost no presence of voters in many polling stations.

Polling officials said that a total of 30 votes, out of 3,166, were cast in the first two hours at Kapasgola City Corporation Mahila College until 10:00 am while only two voters could be seen inside the polling centre.

Katalganj Government Primary School police centre presiding officer Piklu Das declined to say the number of voters casting their votes until 10:00 am at his centre.

‘This centre has 2,841 voters and the presence is very thin in the morning due to cold weather,’ he said while there was no queue in front of any polling booth.

There was not a single voter nor any BNP backed mayoral candidate’s polling agent in any booth of Hazi Muhammad Mohsin College Polling Centre at about 10:30 am. A total of 1,723 female voters are scheduled to cast their vote in the centre, said the centre’s presiding officer Azmal Huda.

At CDA Public School and College polling centre at ward no 4 in the city, a total of 152 votes, out of 3,082, were cast until 10:15 am in all its eight polling booths, the polling centre’s presiding officer said.

There are 172 councillor candidates for 41 general wards and 57 reserve seats for women candidates.

A total of 25 platoons of Border Guard Bangladesh troopers were deployed in Chattogram city along with 9,000 police personnel ahead of the mayoral polls.

The BGB troopers had been patrolling the city since Monday night.