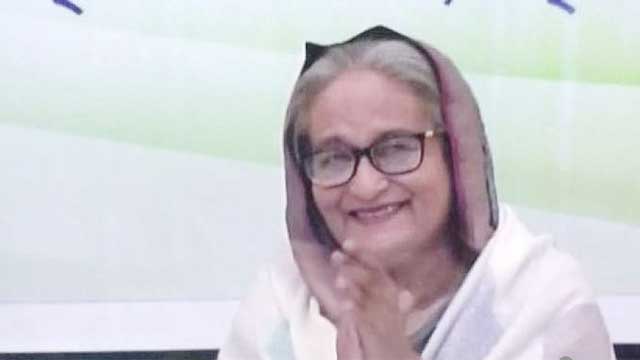 Prime minister Sheikh Hasina on Wednesday took a swipe at the critics of the government for its COVID-19 vaccine activities, saying that it is their habit to criticise any work and create doubts among people.

‘Unfortunately, we’ve some people here who exhibit a negative attitude to everything. Though people don’t get help from them, they criticise any work adversely, create doubts, fear and panic among people over it. This is their habits,’ she said.

The PM made the remarks while inaugurating the COVID-19 vaccination programme at a city hospital, aiming to end the coronavirus situation in Bangladesh.

She virtually launched the vaccination drive at Kurmitola General Hospital, joining it from her official residence Ganobhaban. At the inaugural event, five people were vaccinated in the virtual presence of the PM.

Runu Veronica Costa, a senior staff nurse at Kurmitola General Hospital was the first to get the shot in Bangladesh.

Pointing at the critics, Sheikh Hasina said, ‘They have been suffering from a disease of ill-feeling they find faults in everything. I don’t know its treatment and whether any vaccine will be available for it.’

They raise many questions over whether the vaccine will come or not, what it would be its price and what will be its side-effects, she said.

The PM said she wanted them to brave to have the vaccine.

‘If they come, we’ll provide them with the vaccine so that they remain protected. If anything happens to them who’ll criticise us. It needs to have critics as well. If so we’ll be able to know our faults.’

Extending thanks to the critics, she said, ‘We’ve got the inspiration to work as much as they criticised. It’s a historic day for Bangladesh as it has been able to start the COVID-19 vaccination drive before many other countries across the world.’

The PM sought cooperation from all in making the vaccination programme a success.

Sheikh Hasina said Bangladesh has been able to procure and bring the COVID-19 vaccines in time and thanked the Indian government for sending two million doses of the vaccine as a gift. Besides, Bangladesh has received five more million out of 34 million procured doses.

Noting that more vaccines will come gradually, she said there would be no problem with the vaccination programme.

At the launching event, four others who received the COVID-19 vaccine doses are Ahmed Lutfun Mobin , a physician of the hospital , Professor Dr Nasima Sultana , additional director general ( admin ) of the Director General of Health Services , Brigadier General M Imran Hamid, an official of Bangladesh Army , and Didarul Islam , a member of traffic police Motijheel Zone.

The PM talked to all the recipients to keep up their morale while taking the doses of the vaccine and thanked them for receiving the inoculation first.

At the function, health minister Zahid Maleque said now 70 lakh doses of COVID-19 vaccines were available in the country.

He said Oxford-AstraZeneca vaccine was the safest one in the world. The treatment facilities were there in the case of any side-effect of the vaccination is seen the minister added.

The online registration for possible recipients of the inoculation has also started, said PMO Secretary Md Tofazzel Hossain Miah while conducting the event.

To get registered for the vaccination, one will have to do that through www.surokkha.gov.bd, he said.

Now, the vaccination programme will initially be conducted at five centres in the capital and then the nationwide inoculation will start in early February.