No hope for participatory polls in country 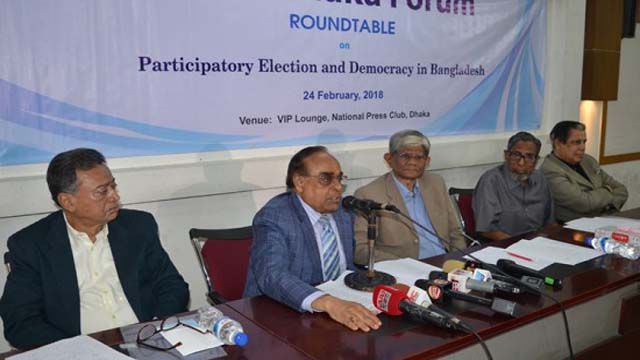 Dhaka, Feb 24 (Just News): A group of noted citizens on Sunday attached importance to holding the eleventh parliamentary elections in a fair manner with the participation of all political parties.

Addressing a seminar in the capital, they also said they find no hope of such fair elections so far, observing that the ruling party has begun the election campaign whereas the opposition has been kept “in captivity”.

A civic platform called Dhaka Forum organised the seminar on the country’s democracy and participatory elections at the National Press Club.

“There is no ray of hope for a free and fair election so far, given the environment prevailing in the country,” former caretaker government adviser M Hafiz Uddin Khan told the seminar.

He expressed his dismay over the authorities’ indifference to certain issues like dissolution of parliament before the polls and troops deployment in the general elections.

According to the existing constitution, the parliamentary elections shall be held before the dissolution of parliament and with the incumbent government in power as ruling Bangladesh Awami League (AL) amended constitution in 2011 to scrap the provision of non-party caretaker poll-time government.

“A political party has already begun its election campaign whereas the other party is in captivity. The election commission is yet to take any steps to make the polls free and fair,” said Hafiz Uddin Khan.

The former caretaker government adviser said the election commission is constitutionally bound to hold the polls in a free and fair manner.

“And to this end, it should do whatever is needed. If necessary, it should take steps to change the law.”

Dwelling on the statement of Indian army chief general Bipin Rawat that a ‘planned’ influx of people from Bangladesh into India’s north-eastern region ‘is underway’ as part of a proxy war being waged by Pakistan with support from China to keep the area disturbed, Hafiz Uddin said, the Bangladesh authorities have not lodged any protest against the statement as yet.

“This is unfortunate. Now many ask question whether Bangladesh is going to be a part of India.”

Gonoshasthya founder trustee Zafrullah Chowdhury said India is the biggest threat to bringing democracy back in Bangladesh. “And this was evident in 2014.”

Moderator of the seminar, former Bangladesh Bank governor Salehuddin Ahmed, said, “We must not lose hope. We hope the country will get a participatory election. Democracy and good governance don’t exist when there is no scope for talks.”

Another former caretaker government adviser Moinul Husein said neighbouring India is taking advantage of Bangladesh’s weaknesses. “When there is no democracy and elections in the country, sycophants win.”

He said he doesn’t think that the members of the civil society can do anything in the present context, given their fear.

He said they don’t believe that the election commission will take any steps in future to ensure a level playing field.

“Even 15 February elections were held on the pretext of upholding the constitution. Every political party wants to cling to power once at the helm.”

Brac University faculty professor Dilara Chowdhury said, “People can understand that the election will be a farce. It is the members of civil society who need to shape people opinions about this and only then pressure can be mounted on the political parties.”

She underscored the need for a neutral platform of civil society beyond the shades of the political parties.

Former diplomat Sirajul Islam presented the keynote speech in the seminar in which he said the hope for a free, fair and participatory election had been significantly weakened.

“There are very few indications that the 11th parliamentary elections will not be like that of 5 January 2014 elections. A participatory election is imperative in the greater interest of the country, not for a certain political party, otherwise the country will plunge into disaster,” he said.