Why is permission required for every programme? 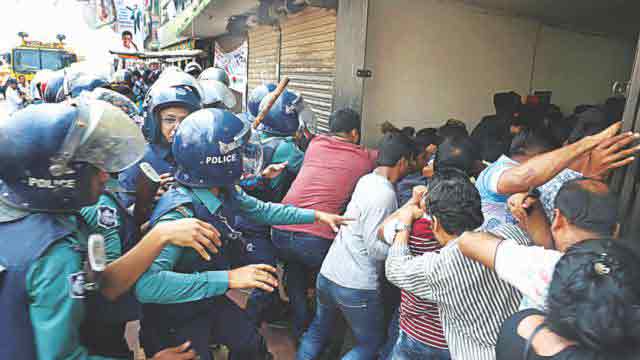 “Why do we need to take permission for every programme? BNP activists did not even break any ban imposed under section 144,” said Alamgir while addressing a press conference at the party’s Naya Paltan headquarters in the capital.

The press conference was convened immediately after the police foiled the party’s black flag procession protesting at the denial of permission for a rally in the capital.

Police used a water cannon to disperse the protesters during which at least 10 BNP activists sustained injures. The law enforcement agency rounded up about 25 activists including party’s one of the joint secretaries general Syed Moazzem Hossain Alal.

Fakhrul alleged that the “illegal government” is always trying to instigate them to resort to violence.

“The BNP activists didn’t even take to the street. Why will the police attack BNP’s peaceful programme? Why will people not be able to display black flags standing on footpaths? This is my fundamental right. Will we then even need permission to speak inside a room?” Fakhrul posed the questions.

Alleging that the “illegal government” is pushing the country towards violence, the BNP secretary general said, “The government will have to shoulder responsibility for any evolved situation, given the way it is behaving.”