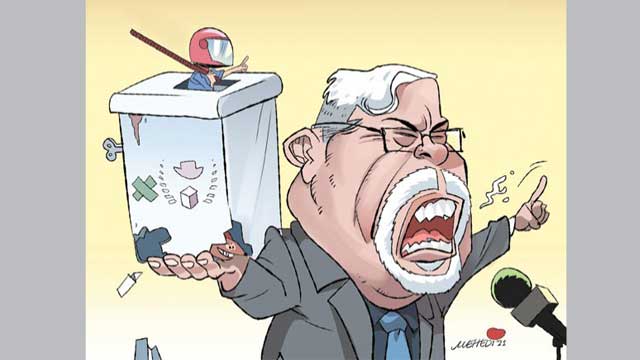 Addressing a discussion marking National Voters Day at Nirbachon Bhavan, the CEC said that the commissioner was making remarks against the commission of his personal interest.

‘Since the very beginning, following every election, he has been highlighting the negative aspects of the commission,’ CEC added.

He, however, said that the commissioner can make any statement as he is an independent individual.

The commission sees the issues which undermine, defame, and demean the commission, said the CEC, adding that Talukdar humiliating the commission out of personal interest and mala fide intent.

Mahbub Talukdar addressed the programme before the CEC.

In his remark, Talukdar said that the level playing field and balance that elections need in order to maintain multi-party democracy is nonexistent.

The local body elections do not hold as much importance as it should have, he said, adding that,

on the contrary, bagging a nomination has become a priority.

He said that a trend of irregularity in the local elections has been created around violence, seizure of a polling station and the destruction of electronic voting machines.

Talukdar said that the candidates are winning unopposed and voting is usually over the night before the election day.

In his written speech, the election commissioner said that the quality of elections which are being held now is likely to go down further if the electoral process is not reformed.

He also said that in the city corporation elections in Dhaka and Chittagong, mayors were elected with record low votes.

Talukdar said that that primarily he was against the use of EVMs but now he was in favour of the new system for two reasons — ballot stuffing cannot take place the night before the election day and it can prevent the embarrassment of getting 100 per cent votes in some centres.

He said that the big question is whether the Election Commission will be needed in the current situation.

The most surprising municipality election in Bangladesh has been held in Raozan of Chittagong, he said, adding that the mayor and 12 councillors were elected unopposed in the February 28 municipal elections.

‘As a result, election officials and law enforcers were also removed from Raozan. Earlier in the upazila elections, everyone in Raozan was elected without contest. Because of this, it is more appropriate to call it nomination as opposed to election,’ he said.

‘Following this model, aspirants can become representatives of the people without contesting any election and it would save a lot of cost. It would also be a welcome relief as there would be no violence and violation,’ he added.

‘Union parishad elections will be held in a staggered manner from next April. My view is that if the level playing field and an environment congenial for the elections are not created, what do we need to have a multi-party democracy,’ he said.