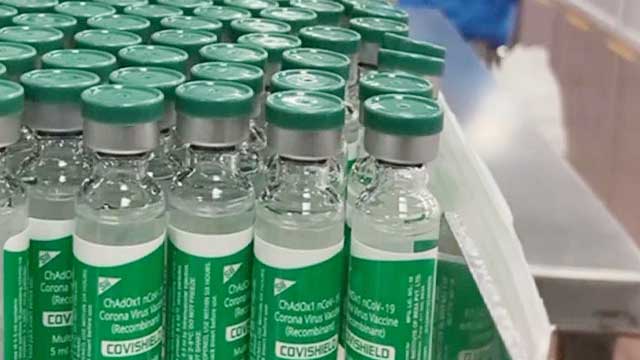 The available doses of the Oxford-AstraZeneca Covid vaccine stood at 6.80 lakh on Sunday while 21.19 lakh people were waiting to get their second dose after taking the first one.

The Directorate General of Health Services said that the second dose inoculation would be stopped soon as the available doses would finish in a week.

So far, 37 lakh people have been vaccinated with the second dose during the mass vaccination programme beginning on February 7.

‘We will have to stop the second dose vaccination as we are running out of our stock of the vaccine,’ said DGHS spokesperson Nazmul Islam in an online briefing on Sunday.

‘As the vaccine should be the same AstraZeneca vaccine for the second dose recipients, we will not be able to continue the vaccination,’ he said.

The 5 lakh doses of Sinopharm vaccine gifted by China on Thursday would be used for people who have not received any vaccine yet, he added.

The government has already suspended the first dose administration since April 26 due to the uncertainty over the AstraZeneca vaccine.

The government signed a purchase deal with Serum Institute of India in November 2020 to get 3 crore doses of the AstraZeneca vaccine manufactured by the Serum.

The government paid in advance to get the vaccine doses by June but the Serum stopped supplying the vaccine in breach of the contract in March.

Serum has so far provided 70 lakh doses to the government, with the latest shipment coming in February.

As the government has looked for alternative sources of vaccines lately, the Drug Administration approved the vaccines from Sinopharm and the Sputnik V of Russia for emergency use in late April.

China gifted Bangladesh 5 lakh doses of Sinopharm vaccine on May 13.

Bangladeshi firms are looking for production of both Chinese and Russian vaccines locally, according to officials.

Nazmul said that the government was trying to procure vaccines from different sources.

He said that they could provide more information about the Russian and Chinese vaccine supplies later this month or early June.