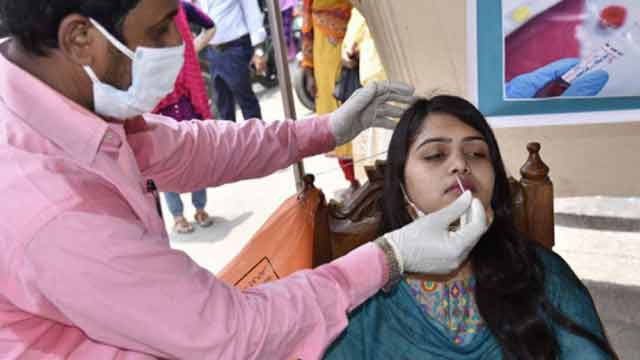 The deaths from Covid-19 in Bangladesh remained high for the second consecutive day as the country logged 63 more deaths in the past 24 hours until 8:00am on Thursday.

The infections from the virus, however, decreased slightly on the day which was 3,840.

The numbers of deaths and infections were 60 and 3,956 respectively on Wednesday.

The daily health update of Directorate General of Health Services came up with the latest statistics that tallied the overall Covid deaths to 13,345 and infections to 841,087 in the country.

A total of 24,871 samples have been tested in the DGHS’s reporting period with 15.44 per cent of case positivity rate.

Among the eight divisions, Khulna recorded the highest 20 Covid deaths in the 24 hours followed by 13 in Rajshahi, 11 in Chattogram, 10 in Dhaka, three in Barishal and two in each Sylhet, Rangpur and Mymensingh divisions.

Out of the deceased, 45 are male and 18 female patients.

A total of 46 of them died at public hospitals, nine at private ones and eight died at their homes, according to the government statistics.

Of the deceased, five tested positive for Covid-19 while the rest ones died with symptoms of Covid infection, RMCH director Brigadier Shameem Yazdany told New Age.

He said that seven of the dead were from Rajshahi district, and one each was from Chapainawabganj, Natore, and Naogoan districts.

The Rajshahi district administration extended its ongoing restrictions on public movement and business activities in the city corporation areas until June 24.

On Thursday the Satkhira district administration on Thursday extended its ongoing restrictions on public movement and business activities in the district for another week till June 24.

The decision was taken at a virtual meeting of the district corona prevention committee as the situation did not improve, said Satkhira civil surgeon Md Hussain Shafayet.

The government of Bangladesh meanwhile, further extended the restrictions on public movement and activities for a month till July 15 to contain Covid outbreak amid widespread violations of the restrictions.

Ban on public gatherings for social events like wedding, birthday and picnic parties, political programmes and religious functions would remain in force from June 16 to July 15, according to the circular.