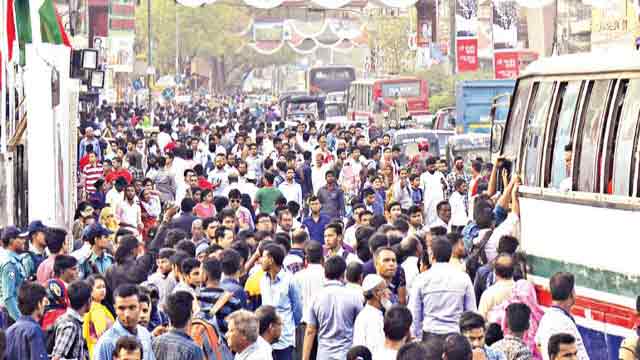 On the day, some roads were closed down for vehicular movement while the public transport services were fewer than usual days causing lanes and by-lanes to be clogged with private cars, CNG autos and rickshaws in different areas till afternoon.

Due to severe gridlock, diversions and people joining the rally on foot, buses and trucks, commuters were seen getting down from transports and walking to their destinations under the scorching sun.

AL general secretary Obaidul Quader, also the road transport and bridges minister, while addressing the rally at Suhrawardy Udyan, sought city dwellers’ cooperation in observing the historic March 7 even if they had to suffer ‘a bit trouble’ on roads.

No prior announcement was made by the Dhaka Metropolitan Police’s traffic department about the diversion.

Buses on different routes including Motijheel and Gulistan routes were also diverted from Karwan Bazar and Bangla Motor to Moghbazar intersection and some were diverted from Science Lab as they were not allowed to go to Motijheel.

At Kamlapur area around 11:45am, Mukti Roy, 35, a resident of Rajarbagh area said that he had been walking to his Rajdhani Super Market workplace at Tikatuli in the city as he found no bus even after waiting about half an hour.

Shamima Khatun, 30, at Motijheel at about 1:15pm, said that she alongwith her seven-year-old daughter needed over three hours to reach Motijheel from her ancestral home at Mouchak under Siddhirganj in Narayanganj using different vehicles like transport vans and rickshaws.

‘I need a bus to go to my in-law’s residence at Mirpur. But I did not find any in the past half an hour,’ she said, expressing her anxiety about the time she would need to get a bus.

Ratna Begum along with her three-year-old daughter and sister-in-law at Shahbagh at about 3:15pm was seen asking people how they could reach Badda under this situation.

‘We had to walk from Azimpur as we did not get even a rickshaw,’ she said as she proceeded on foot towards Malibagh.

Hamid Khan from Tongi at Bangabandhu Sheikh Mujib Medical University gate at about 3:30pm said he came to the university with his ailing mother for follow-up treatment and had been waiting for over three hours to get a bus.

At about 2:30pm near Khamarbari area, people were seen walking to their destinations by getting down from buses as police were diverting Motijheel-bound buses towards Manik Mia Avenue.

Dhaka Metropolitan Police joint commissioner (south) Mofiz Uddin Ahmed said they had arranged some diversions as many people came at the rally with their vehicles.
He said in Suhrawardy Udyan always big programmes had been arranged when facilities were given to people to join and leave the programmes.

‘Everyone in the capital knows it and it has become a normal process,’ added Ahmed.
DMP joint commissioner (north) Mosleh Uddin Ahmed said they had not imposed any diversion at north part of the city.