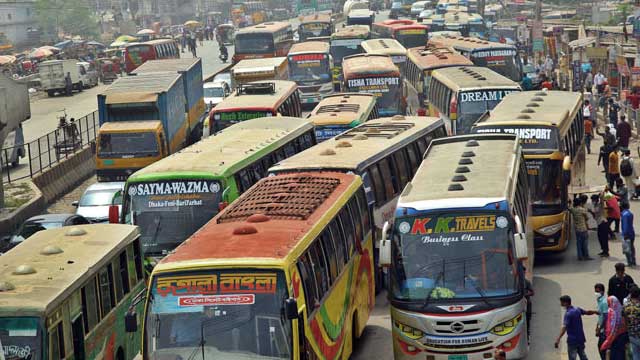 Long route buses to and from Dhaka have been suspended again from Tuesday as part of emergency measures to contain the transmission of Covid-19.

Earlier in the day, the Cabinet Division imposed full lockdowns in seven districts, including four districts surrounding the capital, to safeguard the capital from a rising number of infections.

The restrictions have been imposed in Manikganj, Narayanganj, Munsiganj, Gazipur, Madaripur, Rajbari and Gopalganj. All transport, except emergency services, are suspended in the districts until June 30.

“Any long route buses that wish to enter Dhaka must go through Manikganj, Narayanganj, Munsiganj, or Gazipur. Since all transports in these districts are banned for the next nine days, long route buses will not be able to enter or leave the capital,” Enayet Ullah said.

Previously, the government suspended all public transports for seven weeks from April 5 to combat Covid-19.

According to the health authorities, the test positivity rate in the country climbed to 19.27% Monday, with 4,636 people infected. A further 78 people died from Covid-19 on the day.