Be united against anti-liberation forces: Hasina 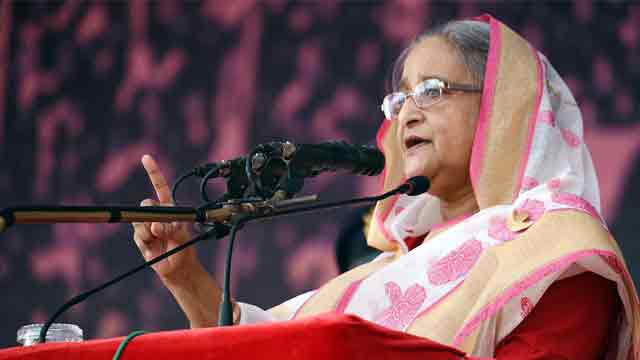 Hasina, also the president of ruling Awami League, came up with the call while delivering her speech marking the historic March 7 at Suhrawardy Udyan in Dhaka.

“I call upon you, those who believe in independence, spirit of the Liberation War and freedom of all people, to get united so that no war criminals and killers cannot come to power ever,” the premier said.

Hasina said the country will move towards development and asked her party men to uphold her government’s progress and development before the people.

She also blasted the previous BNP-Jamaat led government for turning the country into a ‘hell’ and said, “My call to you who are present at the rally or not, please be alert so that the issues of militancy, terrorism and drug cannot destroy our youth.”

Claiming that the country sees development when Awami League comes to power, Hasina raised a question what have been done when General Zia, Khaleda Zia and Ershad were in the state power.

“Why have they failed to ensure development of the country as because they didn’t believe in independence and development. They wanted to run the country engaging the war criminals in state function.”

The government’s achievement already reached the grassroots levels across the country, Hasina claimed, adding it will be turned into a middle-income country by 2021.

“If the trend of the present development is continued, we will be able to build a hunger and poverty free golden Bangladesh by 2041,” she said.

“We will observe the birth centennial of Bangabandhu Sheikh Mujibur Rahman by 2020 and golden jubilee of the independence will be observed by 2021 if the trend the continued,” she adding that Bangladesh will no longer a poor country.

“We will live keeping our head high in the world,” she said.

The prime minister started her speech at 4:40pm, around an hour after she reached the programme venue. AL organised the rally as a part of its pompous observation of the historic March 7.

On this day in 1971, Bangabandhu Sheikh Mujibur Rahman through his soulful address made a clarion call to the people to fight against the Pakistani occupation forces to achieve the long-cherished independence.

Today, the day is being observed with much more fanfare as the historic speech has been included in the Memory of the World International Register, a list of the world's important documentary heritage maintained by Unesco.

The rally began on schedule at 2:00pm. Earlier, senior leaders of the ruling quarter and its affiliate organisations addressed the rally.

The gathering at Suhrawardy Udyan began from 10:00am this morning. Thousands of Awami League leaders, activists and supporters thronged the venue.