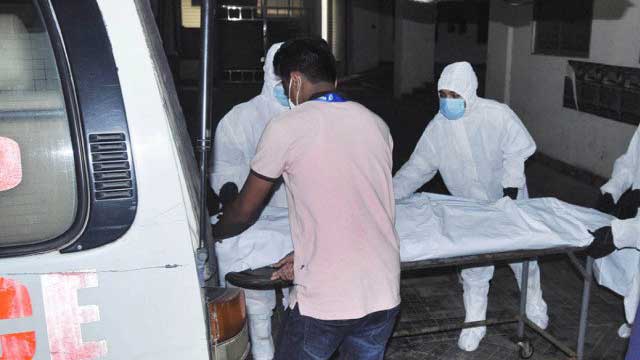 Bangladesh for the seventh consecutive day on Saturday logged 100-plus daily deaths from Covid-19.

The viral disease claimed 134 more lives and infected 6,214 people across the country in the past 24 hours ending at 8:00am on Friday.

The latest figures take the overall death caused by the viral disease to 14,912 and the total number of infections to 936,256.

The daily test positivity rate is 27.39 for the past 24 hours and the death rate is 1.59, a Directorate General of Health Services release confirmed the statistics.

Among the deceased, 84 are male and 50 female patients.

Of the deceased, 107 died at government hospitals, 20 at private ones and seven died at their homes, according to the government statistics.

Earlier the country recorded Covid 119 deaths on June 27 while it logged the highest ever 143 deaths until the date on July 1.

The 100-plus daily deaths were recorded July 7 for six days in a row.

Bangladesh also experienced a total of 45 deaths at the Covid units of hospitals in Rajshahi, Khulna, Satkhira, Kushtia and Tangail during the past 24 hours on Saturday.

The capital city of Bangladesh, Dhaka, experienced more people on alleys of different areas on Saturday, the third day of weeklong ‘strict restrictions’ imposed by the government on July 3.

With them, a total of 1,491 people had been arrested on charges of Covid restrictions violation for the past last three days.