US, UK and Europe for inclusive polls in Bangladesh 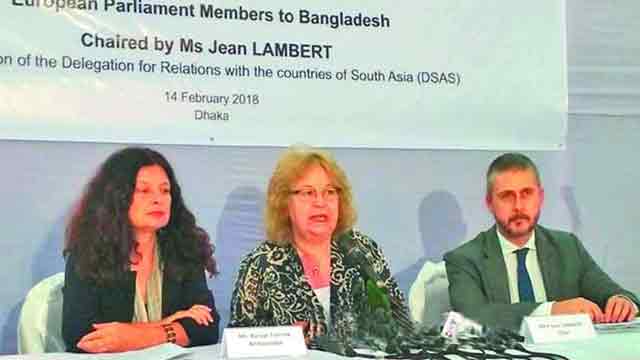 Dhaka, Mar 9 (Just News): The United States, the United Kingdom and the European Union have called for inclusive elections in Bangladesh. Though they may not have raised their voice for inclusive polls very strongly, the western powers are stressing that the next general election should be a “participatory” and “credible” one.

The next general election is due later this year. The prime minister Sheikh Hasina has indicated it would be held in December.

The three western powers have also stressed on the inclusion of the main opposition, Bangladesh Nationalist Party, in the next election so that it is a participatory one.

Diplomatic observers believe that the the west is likely to put more emphasis on an inclusive election as the polls draw nearer.

Earlier this month, the European Union high representative for foreign affairs and security policy Federica Maria Mogherini in Brussels and US President Donald Trump’s aide Lisa Curtis during her visit to Bangladesh, UK secretary of state for foreign and commonwealth affairs Boris Johnson during his Dhaka visit, and a delegation of European Union during in their Dhaka visit called for an inclusive election in Bangladesh.

Diplomatic sources in Dhaka and Europe told Prothom Alo that though the call for inclusive polls was not a main agenda in the discussions, the representatives of some countries raised the issue while discussing the country’s political situation.

A diplomatic source in Brussels told this correspondent on Tuesday that the Maria Mogherini raised the issue of the election during a meeting with Bangladesh foreign minister Abul Hassan Mahmood Ali recently.

It was learnt from officials in Dhaka and Brussels that the meeting was arranged on short notice and on Federica’s initiative. The meeting was arranged to discuss the Rohingya crisis. At one point, the political situation came up in the discussion and Federica raised the issue of inclusive polls. She urged the Bangladesh government to conduct inclusive polls and stressed on a free, fair and credible election.

On 2 March, the EU issued a statement on their website soon after the meeting of Federica and Mahmud Ali. The statement said that the two leaders discussed Bangladesh-EU bilateral relations and Bangladesh’s political situation.

She raised the issue while having meeting with senior Bangladesh government officials including the prime minister’s international affairs adviser Gowher Rizvi, the prime minister’s security adviser Major General (retired) Tarique Ahmed Siddique and Foreign secretary Abul Hassan Mahmood Ali. The foreign minister told her that the government is committed to a free, fair, credible and inclusive election and would welcome observers from varies countries including the US.

Diplomatic sources told Prothom Alo that during her meeting with BNP leaders, Lisa Curtis discussed about election in detail. She told them about the US’s expectations for an inclusive election in Bangladesh.

When asked about the West’s urge for inclusive polls, Awami League presidium member Faruque Khan told Prothom Alo that his party wants inclusive polls now as it wanted it in the past and it will want inclusive polls in the future. He also said that it is a party’s very own decision whether it would participate in an election or not. He hoped that the BNP would forget its past mistakes and take necessary measures to participate in the election.

BNP secretary general Mirza Fakhrul Islam Alamgir told Prothom Alo on Thursday that the international community raised questions about the credibility of 5 January election and from this point of view, the Western countries are now raising the issue for an inclusive election in the country. He said that in their discussions with BNP, the officials of the western countries had said that in the democratic process, all political parties should go to the election.

While talking to newsmen on 28 February at the British Amenities Club, British high commissioner in Dhaka, Alison Blake said that one of the key agendas during Boris Johnson’s Dhaka visit was to urge for a free, fair, credible and inclusive election.

Former Bangladesh ambassador in Washington M Humayun Kabir told Prothom Alo that they are raising the issue of elections because this is related to their governance structure. The nearer the election is, their insistence will increase. They fear that instability in the country will give rise to terrorism and many other problems. He also said that they were highlighting the way ahead regarding the election and they also hoped for a consolidation of the fundamental basis of Bangladesh’s democracy. -Prothom Alo