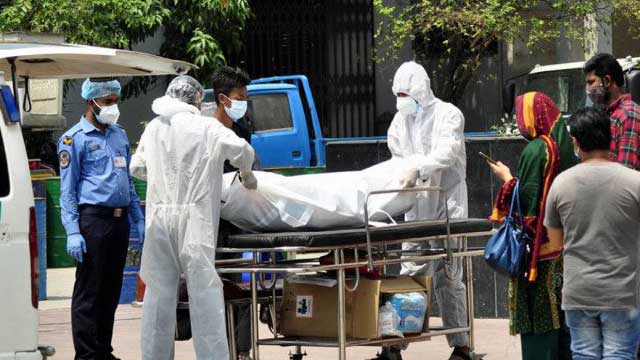 The daily test positivity rate is 30.48 per cent.

A Directorate General of Health Services release confirmed the statistics.

A total of 24,979 samples have been tested during the reporting period across the country while Bangladesh had tested 73,64, 888 samples as of July 21.

In the timeline, 9,704 recovered from the viral disease during the timeline totalling the recovery to 9,61,044.

Of the deceased, 98 were males and 75 were females.

A total of 146 died in public hospitals, 22 in private hospitals and five died at their homes, according to the government statistics.

Among the divisions, Dhaka logged the highest death of 58 people while 38 died in Khulna, 32 in Chattogram, 11 in Rajshahi, eight in Barishal, six in Sylhet, 16 in Rangpur, and four died in Mymensingh divisions.

Besides death of Covid patients, reports received from different districts of the country said that a good number of patients had died with Covid symptoms at the Covid units in hospitals there.

The DGHS press release did not mention the number of deaths with Covid symptoms.

Reports received from seven districts - Khulna, Rajshahi, Kushtia, Jhenaidah, Barishal, Satkhira and Mymensingh- said that a total of 82 patients died in Covid units of hospitals in the districts in 24 hours ending Wednesday morning.

Of the deceased, 38 were Covid positive patients and 44 had Covid symptoms, the reports said.