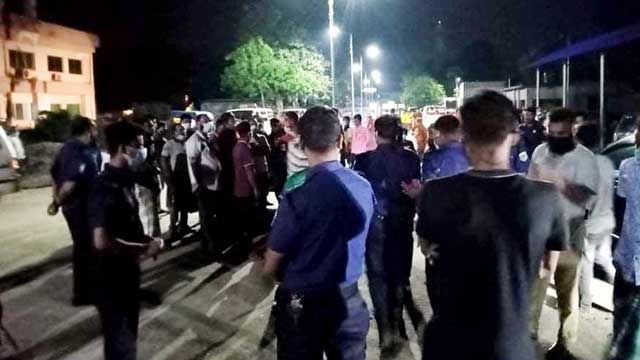 Intern doctors in Bogra have been accused of beating up a pregnant woman, her family members, and policemen.

Maulana Aslam Ali, khatib of a local mosque, said that his two months pregnant wife, Joynab Begum, 21, was admitted to the hospital on August 19.

Joynab’s condition started deteriorating from Saturday noon as she was shaking and vomiting.

Aslam went to the intern doctors and urged them to check on her, but instead of attending the medical emergency, they misbehaved with him.

Aslam quoted the doctors saying: “We have nothing to do if the patient dies.”

"Later, when I tried to record a video of their negligence with my mobile phone they forced me to stop filming. This made them very angry and they said that would not treat my wife," Aslam added.

"In the evening, when my wife’s condition deteriorated further, I went to the intern doctors again. This time an altercation broke out and at least 50 doctors and interns got together and started beating me up. They also beat up my younger brother Jakir Hossain.

“At one point, when my wife came to save me and my brother, the intern doctors kicked her in the belly and she started bleeding," Aslam alleged.

He said: "The doctors assaulted Aslam, his wife, and their family members. Three policemen were also injured in the incident.

“Senior police officials have been informed about the incident.”

However, when contacted, SZMCH Deputy Director Dr Abdul Wadud, denied all the allegations brought up against the doctors and interns of the hospital.

"There was a scuffle between the intern doctors and the patient's attendees. Then the police got involved in the altercation when they arrived.

“Besides, the pregnant woman was not kicked on her belly,” the deputy director claimed.

Following the incident, Joynab was shifted to a local private hospital for treatment.

This is not the first time that the doctors, staff members, and interns of the SZMCH have been accused of negligence in duty and assaulting their patients.

In March this year, Takbir Islam Khan, a senior district Chhatra League leader, was admitted to the hospital after being stabbed by miscreants. He later died while undergoing treatment

According to his family member, he died due to the negligence of the doctors.

In a separate incident earlier, a Gazipur chairman was also assaulted by the doctors and interns of the hospital.