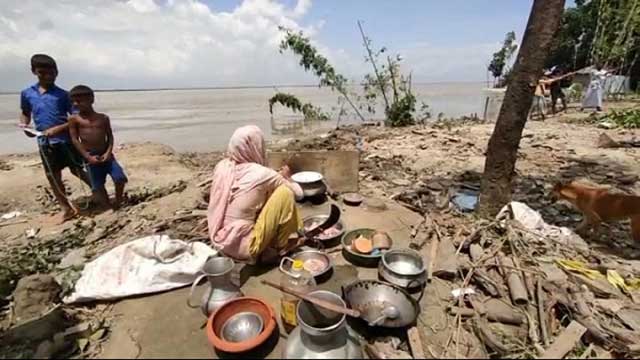 Over 100 families in Ulipur upazila of Kurigram district have been rendered homeless in a week due erosion by the Teesta river.

Arjun of Daldalia Union and Gorai Pier, Dalal Para, Hokdanga and Doctor Para villages of Thetrai Union were the hardest hit areas in the upazila.

At least 500 families of these areas have become destitute by losing their homes and land in this monsoon alone, a UNB correspondent reported after visiting the areas.

Zia, a resident of Arjun village in Daldalia union, said, ‘Although most part of the village was devoured by the river, no visible steps were taken by the concerned authorities in this regard.’

Similar allegations were made by the residents of other affected villages.

Ayub Ali, Khetrai UP chairman, said the severity of erosion has been at an all-time high in the past few days.

‘The river is swallowing houses and lands within a blink of an eye in the last two days,’ he said.

‘I have informed the water development board and the upazila administration to immediately take action over the matter,’ he added.

When contacted, executive engineer of Kurigram Water Development Board Ariful Islam said that Geo bags were thrown to prevent the erosion as an immediate step.

‘The authorities will discuss a more sustainable and long-term solution on the matter once they get allotments,’ he added.