5 including CID ASP jailed over abduction of woman, son for ransom 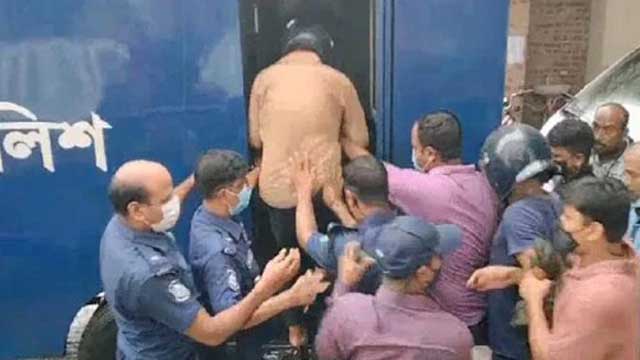 Five people including three CID officials of Rangpur district have been sent to jail in the incident of abducting a woman and her son and demanding Tk15 lakh as random for their release.

Justice Shishir Kumar Basu of Dinajpur Judicial Magistrate Court-8 passed the order after the five accused were produced in court on Wednesday.

Another person named Polash was later arrested on allegations of aiding the abductors.

The abducted Jahangir filed a case in the incident.

SP Ataur Rahman of Rangpur CID said: “They went there [Dinajpur] without my permission. We will take action after we find out why they went there and whom they abducted.”

Also Read - 2 arrested over kidnapping, murder of children in Gazipur

According to different sources, the three CID officials abducted one Zahura Begum and her son Jahangir from their home in Nandedai village of Chirirbandar upazila in Dinajpur at around 9pm on Monday.

The abductees’ family members then contacted the police and RAB for their rescue.

Later, the abductors demanded a ransom of Tk15 lakh from Zahura Begum's husband Lutfar Rahman and brother-in-law Ramzan Ali over the phone.

Lutfar and Ramzan went to pay the ransom near Hajee Mohammad Danesh Science and Technology University at 5pm on Tuesday. The abductors were nearby, but fled the scene by their microbus after realizing that Lutfar and Ramzan were accompanied by plainclothesmen.

After a short chase, police apprehended Sarwar, Hasinur, Ahsanul and Habibur at a place called 10 Mile in the district.

Following interrogation at the Dinajpur Detective Branch office they were produced in court on Wednesday.