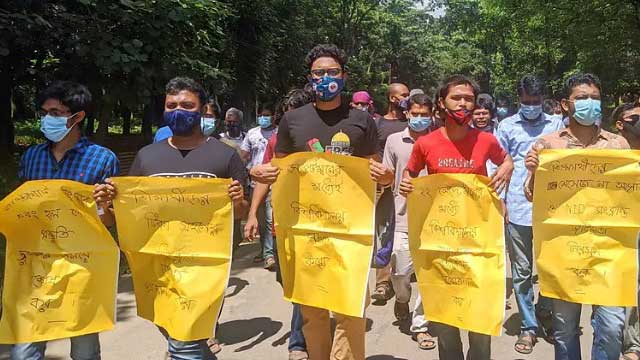 Students of Jahangirnagar University on Wednesday demonstrated on the campus demanding resumption of academic activities in-person after opening the halls by September 30.

On 11:30pm, over hundreds of students from different departments brought out a protest march from the university’s new arts building and ended at the new administration building after parading important roads of the campus.

Addressing the rally after the procession, Bangladesh Students Union JU unit general secretary Rakibul Rony said, ‘JU authorities are still dragging feet about the inoculation of the students. For this reason, they cannot send the actual information following the call of the University Grants Commission.’

A Master’s student of the university’s history department Nusrat Farin, convener of the JU unit of Socialist Student Front Shovon Rahman and general secretary Abu Sayed spoke at the protest programme, among others.

Later, the protesting students submitted a memorandum with a three-point charter of demands, to the acting vice-chancellor of the university professor Nurul Alam.

The demands included announcement of the date of reopening of the university and residential halls by September 22, resumption of academic activities in person by September 30 and installation of vaccination booths on the campus in order to provide necessary guidelines to the students regarding the application and NID related issues.

While contacted, JU acting registrar Rahima Kaneez said, ‘The university will reopen soon following a meeting of the university’s syndicate body. Besides, we have to complete some proceedings before reopening the residential halls.’

The registrar also said that an administrative meeting was also scheduled for Wednesday evening to take decision regarding the reopening of the university.

All universities in the country have remained closed since March 18, 2020 following the Covid outbreak.