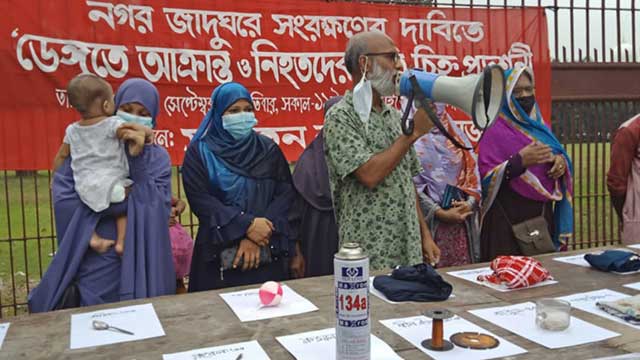 Some residents of Jurain area of Dhaka today put up an exhibition -- in front of the Kodom Fountain near Supreme Court area -- of personal belongings of people who died from dengue.

The residents also demanded to showcase the items belonging to 19-20 such victims who used to live in ward 53 in Jurain under Dhaka South City Corporation, in the Dhaka Nagar Jadughar.

Mizanur Rahman, a resident of the ward who was present at the programme, said that exhibiting the items in the museum will showcase the failure of city corporation authorities to protect the people.

The items included an empty can of condensed milk and tea cup belonging to Fatema, who was a tea seller in the area, and a T-shirt and mug belonging to Abul Kalam Azad.

Palash Devnath, father of Alongkita (5) who is suffering from dengue, said that DSCC only arranges fogging outside but mosquitoes also breed inside houses.

"I complained about the mosquito larvae in my building to the landlord. When he did not take any step, I complained to the DSCC authorities, but they also failed to protect my daughter," the father said.

"The ward councilor and authorities should work round the year to control the dengue menace," Mizanur Rahman said, adding that there are over 1,000 dengue patients in their area currently.

"But the ward councilor denies it and says there are only 250 infected," Mizanur added.

Only the fear of being fined cannot make people clean their houses and surroundings; people need to be included in the mission and made aware, he also said.