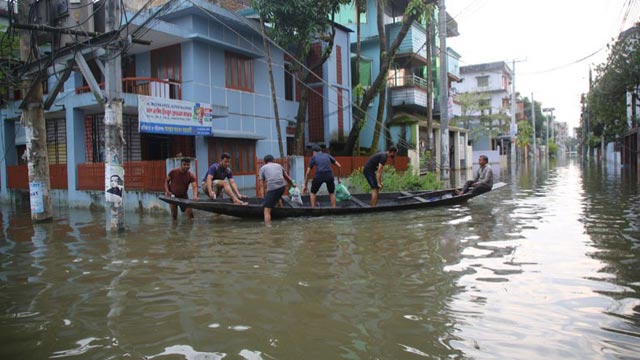 A total of 550 people have been diagnosed with diarrhoea and other water-borne diseases in the past one week in Sylhet, compounding the woes of the district’s flood-hit people.

According to the Sylhet Civil Surgeon’s office, 400 people have been suffering from diarrhoea while 150 people were diagnosed with skin and other diseases. The number of infected people is increasing day by day.

A total of 140 medical teams have been sent to the 13 upazilas of the district -- declared as diarrhoea-prone -- to provide medical services to the flood-hit people.

Deputy Civil Surgeon Joyshankar Datta said, ‘People are suffering from diarrhoea and other water-borne diseases, and our medical teams are working round-the-clock clock to provide medical services to them.’

Zahidul Islam, chief health officer of Sylhet City Corporation, said that a ward-level health campaign had already been launched and ‘we have a plan to carry out such health campaigns daily for a fortnight’.

‘Residents of the city are suffering a lot due to the unavailability of pure drinking water, and we have already distributed 1.60 lakh water purification tablets,’ he said.

Himangshu Lal Roy, director of Sylhet Health Division, said, ‘Some 183 people have been diagnosed with diarrhoea in the past 24 hours. The figure was 171 the previous day.’

Besides, a total of five water purification machines -- four from the Department of Public Health Engineering and one from the Red Crescent Society -- have been pressed into service in the district.

‘Each machine can purify 500 litres of water an hour,’ the official said.