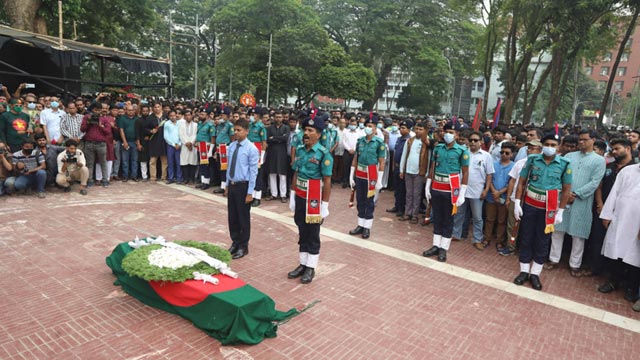 Prominent journalist, writer, and columnist Abdul Gaffar Chowdhury's body was brought to Dhaka from London this morning under the state management.

A flight of Biman Bangladesh Airlines carrying his body reached Hazrat Shahjalal International Airport around 11 am.

The body was be kept at the Central Shaheed Minar where people from all walks of life paid tributes to the lyricist of "Amar Bhaier Rokte Rangano".

A guard of honour was also given to him at Shaheed Minar.

Around 3:30 pm, his namaz-e-janaza will be held at the Dhaka University Central Mosque.

Then, his body will be taken to Jatiya Press Club at 4pm where journalists will pay their homage to him.

Later, Abdul Gaffar will be buried at Mirpur Martyred Intellectuals' Graveyard around 5:30pm.

On May 19, Abdul Gaffar died of a heart attack at a hospital in London at the age of 88.

The British-Bangladeshi community and other admirers paid their last respect to Abdul Gaffar Chowdhury, following his first namaz-e-janaza held in London's Brick Lane Mosque on May 20.