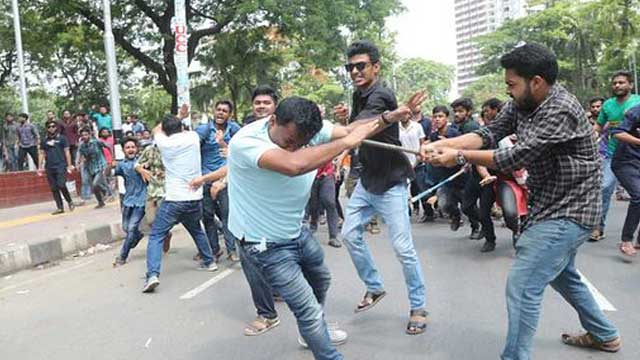 The BCL leader filed the case, accusing that the JCD leaders and activists intended to commit murders during recent clashes between the two student organisations on and near the Dhaka University campus.

He said that a DU BCL leader filed the case against 17 named and 50-60 unidentified JCD leaders and activists over the Tuesday clashes that took place in front of Curzon Hall.

JCD DU unit convener Akhtar Hossain said that the whole world learnt from the mass media that BCL leaders and activists attacked our peaceful programme on the Dhaka University campus, adding, ‘But those who attacked us have now filed a case against us.’

Witnesses said that they heard at least three gunshots during the clash that followed the BCL attack.

BCL activists also beat up a journalist during the clash calling him a JCD activist and snatched his mobile phone.

The injured journalist is Abir Ahmed, a staff reporter of an online news portal named ‘The Daily Campus’.

Earlier, on Tuesday morning, at least 40 JCD leaders and activists, including female leaders, were injured in an attack by BCL on the university campus.

That day, the two student groups engaged in a clash near Doyel Chattar in which also some activists sustained minor injuries.

The JCD activists were forced to leave the DU area at about 12:00pm after they faced stiff resistance from the BCL activists.

Denying the allegation of the attacks, BCL DU unit general secretary Saddam Hussain said that they did not attack the Chhatra Dal, rather Chhatra Dal cadres attacked them with home-made weapons.

On Wednesday, the DU administration filed a case against three to four hundred unidentified people with the Shahbagh police station over the Tuesday incident.