Govt has no plan to rehabilitate flood victims: BNP 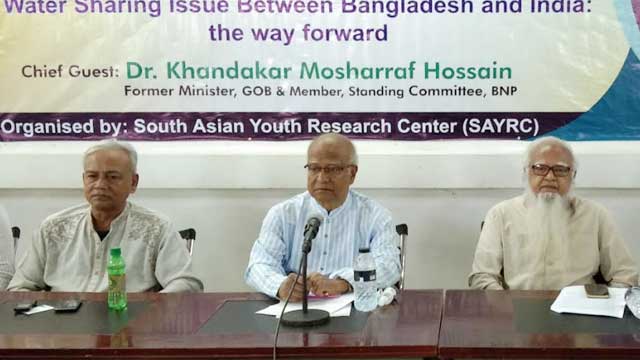 BNP senior leader Khandaker Mosharraf Hossain on Tuesday alleged that the government has no plan to help and rehabilitate the flood victims in the country’s northeast region.

“We express our sorrow to the flood victims. You have seen in the newspapers how people are living in inhumane conditions in flood-hit areas. We’re observing that the government has no plan to deal with catastrophic floods and to… rehabilitate the victims,” he said.

Speaking at a round-table discussion, the BNP leader also said the government did not come forward to stand beside the flood-affected people.

“It’s unfortunate that they (govt) were busy with other things. If the government is not elected by people’s vote and if there is no government of people, then public suffering and grief won’t get priority over the interests of individuals and groups,” he observed.
The South Asian Youth Research Center arranged the programme titled “The Issue of Water Sharing between Bangladesh and India” at the Jatiya Press Club.

Mosharraf, a BNP standing committee member, said the government has so far not calculated the extent of damage caused by the severe floods in the country.
Referring to the recent Joint Consultative Commission (JCC) meeting with India participated by Foreign Minister AK Abdul Momen, he said it was nothing but an eye wash.

He said the minister only gave a lip service at the meeting without any report from the Joint River Commission.

The BNP leader said when many areas of Bangladesh were being inundated in flood waters India opened all the gates of the Farakka barrage.

“We’re submerged with water from the upstream when we don't need water. When we need water for saving our lives and livelihoods, then upstream water is being diverted to other areas (of India), turning Bangladesh into a desert,” he observed.

The BNP leader also said a big bridge over the Jumna River was constructed but bullock carts run under the bridge now during the dry season. “This is happening for the barrage and dams in India,” he said.

He also said most rivers in Bangladesh are losing their depths and widths due to the unilateral withdrawal of water from the common rivers by India during the dry season, causing floods during the rainy season.

Mosharraf alleged that it has been long the current government has failed to ink the Teesta water-sharing deal and ensure a fair share of waters from other common rivers due to its knee-jerk foreign policy.