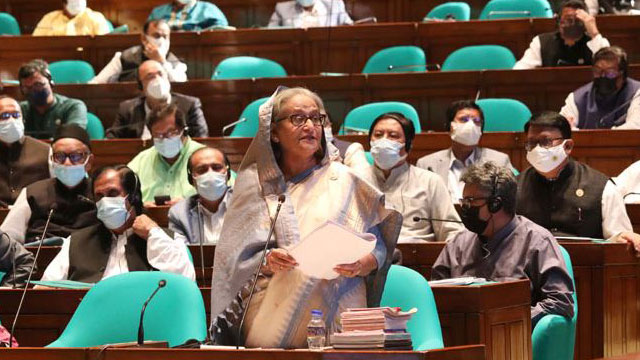 Prime minister Sheikh Hasina on Wednesday urged the countrymen to exercise austerity and make savings in order to protect themselves.

The prime minister asked all to make savings and thus contribute to the national savings alongside reducing all the unnecessary expenses and cancel purchasing import-based luxurious goods and giving priority to buying only the necessary goods.

Taking part in the discussion on the national budget for the 2022-23 fiscal year in the 18th session of the 11th parliament, the prime minister said this.

Sheikh Hasina, also the leader of the House, said that her government had attached the topmost priority to controlling the inflation rate in the budget against the backdrop of the ongoing Covid pandemic coupled with the Russia-Ukraine war and disruption of the supply chain.

‘The budget has been formulated to give importance to containing price inflation because of the rising trend of import-based price inflation due to the ongoing Covid pandemic, the Russia-Ukraine war, and disruption of the global supply chain,’ she said.

She said her government has been able to provide such a large budget of Tk 6,78,064 crore amid the adverse situation that arose out of Covid-19 and the Russia-Ukraine war.

She added, ‘Many people couldn’t think that we would be able to place it (the budget), but we’ve been able to do it.’

The prime minister extended her sincere thanks to the finance minister and all concerned involved in preparing the budget.

Sheikh Hasina expressed her firm determination to implement the budget, which is the 23rd national budget placed by the Awami League government since after the Liberation War and the 4th budget given during the current regime of the AL government.

She said that Bangladesh would have to go forward facing the adverse impacts of the war and the coronavirus pandemic.

‘We’re making the impossible things possible by overcoming hundreds of obstacles at home and abroad,’ she said.

The prime minister said that Bangladesh had successfully been able to maintain economic progress despite the fact that many developed countries were facing difficulties due to global instability.

She also said that her government was taking all the required measures to control inflation due to the price-hike of goods in the global market.

Sheikh Hasina mentioned that the main strategy to keep inflation under control would be to raise the supply of goods and reduce the existing growth of demand, saying, ‘To reduce inflation is our big target.’

She said that the much-hyped Padma Bridge recently opened to traffic, which would bring a revolutionary change in the communication system and also ease the supply of goods largely, helping reduce the inflation rate.

Noting that the government is discouraging the import of luxurious goods, she called upon all to refrain from importing goods that were not very essential.

Sheikh Hasina said that the government was taking measures to reduce dependency on imported goods.

To this end, the prime minister asked everyone to consume local products and services.

Sheikh Hasina said that the government didn’t become disappointed as the construction of the Padma Bridge had been delayed for two years due to conspiracy.

‘The 42 pillars of the Padma Bridge are the reflection of a courageous Bangladesh,’ she said.

The prime minister made this remark while responding to a tabled question from ruling Awami League lawmaker Begum Marina Jahan, elected from the Sirajganj-6 constituency.

Sheikh Hasina said, ‘Our emotions, our creativity, our courage, our tolerance, and our confidence are involved with this Padma Bridge. We built this bridge with stubbornness.’

She continued, ‘At last, we saw the light coming out of the darkness. A flash of red, blue, green, and golden lights are shining over the bosom of Padma.’

The leader of the House said that the conspiracy began when the tender process for hiring a contractor for the construction of the Padma Bridge started.

She said that the World Bank, ADB, JICA, and IDB had suspended loan agreements alleging corruption in the recruitment process of consulting firms to oversee the construction of various packages of the project.

She mentioned that in 2017, when allegations of a corruption conspiracy were proved false in a court in Toronto, Canada, the World Bank announced a return to the project.

‘But, for the sake of the country and the people, we took the bold decision to construct the Padma Bridge with the government’s own funding instead of taking the World Bank loan,’ she added.

With the inauguration of the much-desired Padma Bridge the project is not a dream today but a visible reality, she said, adding that the bridge has conquered all domestic and foreign conspiracies, passed all challenges, and shown the strong morale of not giving up.

Expressing gratitude for the inauguration of the Padma Bridge, Sheikh Hasina said that she was happy, proud, and excited along with millions of countrymen.

‘Ignoring many obstacles and breaking the wave of conspiracy, the much-desired bridge stands today on the chest of the mighty Padma,’ she added.

She went on saying, ‘This bridge is not only infrastructure of brick-cement-steel-iron-concrete, but it is also a symbol of our pride, our ability, and dignity. This bridge belongs to the people of Bangladesh.’

The prime minister said that the launching of the Padma Bridge would accelerate political, social, economic, administrative, cultural, and overall development by integrating the two regions of the divided country, including the creation of rail connectivity between the south-western parts of the country, development of trade and commerce, creation of new employment opportunities in the field of agriculture, traditional folk art, small scale industries as well as creating an impact on the broader sectors of the national and regional economy.

She said that the economic activities surrounding the Padma Bridge would play a significant role in reducing unemployment as well as alleviating poverty.

In addition, direct road and rail connectivity will save countless working hours for the common people and improve their quality of life, she added.

‘Therefore, if the price of this imported edible oil increases in the international market, it will also have an adverse effect on the domestic market,’ she noted.

Sheikh Hasina mentioned that a deficit also occurred when the production of different items fell short of the targets due to natural disasters, including wars, floods, droughts, and tidal surges.

In addition, if the import of edible oil is obstructed from the sourcing countries for any reason, it has an adverse effect on the domestic market, she said, adding, ‘And this is why the edible oil market is becoming unstable.’

The prime minister said that the recent Russia-Ukraine war created a crisis in the import of goods from Russia and Ukraine, which also contributed a lot to the price hike of import-dependent goods. ‘For the same reason, the price of edible oil has also increased in recent times,’ she added.

She said that due to the war, production and supply systems declined alongside the rise of global inflation and commodity prices, and Bangladesh was no exception.

But, it is becoming possible to increase the production and supply of goods in Bangladesh due to timely measures taken by the government, she said.

The prime minister also mentioned that in May 2022, the UK registered 9 per cent inflation, while the United States 8 per cent, India 7.9 per cent, and Turkey 54.8 per cent, but during this period, inflation in Bangladesh has increased to 7.42 per cent, and the average inflation to 7.2 per cent.

She said, ‘We are trying to keep the price of commodities affordable by keeping the economy afloat.’

Considering the discomfort of common people, the government has already taken various steps to keep the prices of essential commodities including edible oil within their purchasing power, she added.

Answering another question from ruling AL lawmaker Nur Uddin Chowdhury Nayan, elected from Lakshmipur, the prime minister said that the Bangladesh Air Force was in the process of building a small range of primary training aircraft and unmanned aerial vehicles using its own technology.

Following the strategic direction of this endeavour, Bangladesh will one day be able to build high-tech warplanes, helicopters, and unmanned aerial vehicles, she added.