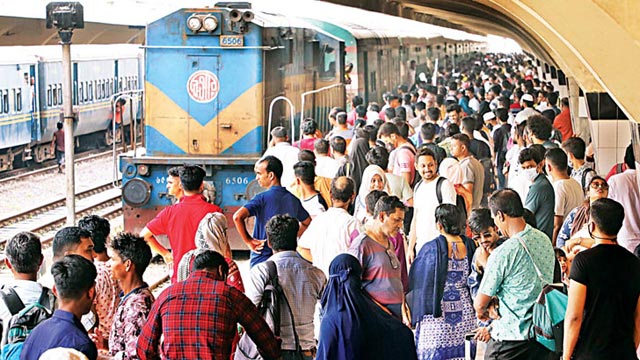 The crowd of people at Kamalapur Railway Station was comparatively thin on Saturday, the second day of the Eid-ul-Azha vacation and overall fourth day of the Eid journey to home.

Many home-bound people were seen in queues, buying tickets at Kamalapur Railway Station in the capital. But the scene was completely different on Friday.There were huge crowds there, waiting to go home.

Though most of the trains were not delayed as in earlier days, there was a schedule upset for northern districts and Khulna-bound trains.

Nilphamari-bound Nilsagar Express saw the biggest schedule upset. Though the train was scheduled to leave Kamalapur Railway Station at 6:40am, it did not leave even till while filing of this report. Railway authorities said the train could leave at around 3:10pm. While the Khulna-bound Sundarban Express was scheduled to leave station at 8:15am, the railway authorities said it could leave at around 11:35am.

Sagar Hossain, a passenger of Khulna-bound Sundarban Express, told Prothom Alo at around 11:15am, “I have been waiting at the station with my family since dawn. Where is the end to this suffering?”

Besides, Jamalpur-bound Agnibina Express, scheduled to leave at 11am, Panchagarh-bound Ekota Express (10:10am), Sylhet-bound Jayantika Express (11:15am), and Kishoreganj Express (10:45am) could not leave the station as of filing of this report.

Sardar Shahadat Ali, additional director general (operations), Bangladesh Railway, told Prothom Alo, “Not all the trains could maintain their schedule today. There is a schedule upset for northern districts and Khulna-bound trains. But the trains of Dhaka-Chattogram, Dhaka-Mymensingh and Dhaka-Kishoreganj routes have been maintaining the schedule.”