Eid-ul-Azha being celebrated in Bangladesh 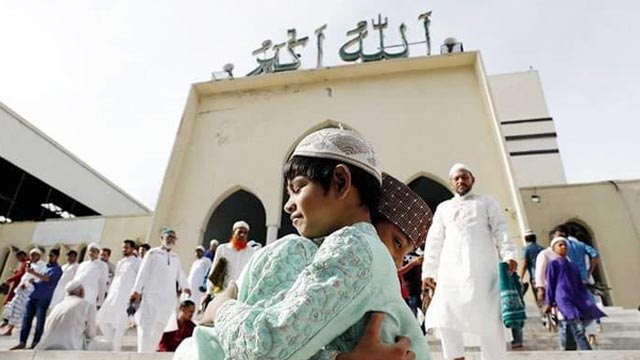 Eid-ul-Azha, one of the biggest religious festivals of the Muslims, is being celebrated across Bangladesh on Sunday with due solemnity, a sense of sacrifice and religious fervour amid the Covid outbreak for the second consecutive year.

The celebrations begin with Eid congregations all over the country followed by the sacrifice of cattle head in the name of Allah.

Millions of devotees across the country offered Eid prayers at mosques and eidgahs in the morning seeking divine blessings, peace and progress for the country as well as getting rid of the viral disease.

They also prayed for the ease of sufferings of the flood affected people in the country.

The main Eid congregation in Dhaka was held at the National Eidgah Maidan at about 8:30am.

The first and the second congregations at the Baitul Mukarram National Mosque were held at about 7:00am and 8:00am respectively. Three more congregations will be held till 11:00am.

Tens of thousands of people left Dhaka and other cities to celebrate the festival with their families in village homes despite high risk of Covid infections as the health guidelines were largely ignored during the Eid journey.

Health rules including maintaining physical distancing and using masks and hand sanitisers were largely ignored in most places in the absence of any effective monitoring system by the authorities concerned.

Commemorating the supreme sacrifice of Prophet Ibrahim, Muslims all over the world slaughter animals taking inspiration from the unique example of sacrifice to please Allah which is a key religious ritual of Islam.

The first day of Eid-ul-Azha, which falls on the 10th day of the Arabic month of Zilhajj, is the day the Prophet Ibrahim, some 4,500 years ago, offered to sacrifice his beloved son Hazrat Ismail, who willingly submitted to his father’s wish to please Almighty Allah.

But the Almighty, however, spared Hazrat Ismail and instead placed a sheep in his place for the sacrifice.